Twenty architects and designers showcased designs they made at home during lockdown for the Design Trust's Critically Homemade exhibition in a live talk moderated by Aric Chen and Design Trust co-founder Marisa Yiu.

The exclusive live talk showcased a selection of the 70 objects created in response to a challenge set by Design Trust, a charity that enables creative projects in and around Hong Kong.

The initiative, called Design Trust: Critically Homemade, invited creatives around the world to design and prototype a 20cm x 20cm object that addressed social and environmental issues arising from the pandemic while they were stuck at home during lockdown.

Over 130 architects and designers including Michael Young and People's Architecture Office submitted prototypes, which are on show at an exhibition at Soho House in Hong Kong until 4 October.

They were joined by 18 other designers from around the world in the relay discussion moderated by curators Chen and Yiu, presenting designs including a therapeutic metronome, a series of miniature moveable rock sculptures and a concrete jump rope will feature in the live discussion. 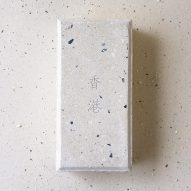 Here is the full list of designers that took took part:

Dezeen is a media partner for the Design Trust: Critically Homemade exhibition.