Interior designers Jordan Cluroe and Russell Whitehead, founders of 2LG Studio, have built a white-stained timber pavilion with a circular cutout window in their back garden.

Designed during the coronavirus lockdown, the pavilion was the final element of Cluroe and Whitehead's five-year renovation of their own home in Forest Hill, southeast London.

"It was time the garden had our attention and we wanted to create something that could be a focal point, but also unite the inside of our home with the outside," explained Whitehead from 2LG Studio.

"Our home has been our passion project over the past few years – it's been the catalyst for so many of our product design collaborations over the years, so it felt natural to extend that out into our garden. It has given the garden an incredible sense of space and it draws you outside," he told Dezeen.

The simple pavilion was built across the rear end of Cluroe and Whitehead's garden on a timber platform reached by two steps.

A seating area with two sofas occupies one side of the deck, while a dining area enclosed by a structure made from slats of British-grown larch is on the other.

Cluroe and Whitehead washed the slats with an eco-friendly stain to give the timber a white shade that allowed the woodgrain and pink tones of the larch to remain visible.

A circular cut out was created to provides views back to the house from the dining area and, along with the white tones, be reminiscent of the house in the film Beetlejuice.

"We have always been obsessed with the white house in Tim Burton's 80s classic, Beetlejuice, so we wanted to give a nod to that with this design," said Whitehead. 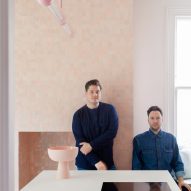 "The circular cutout window, large scale trellis and whitewash finish gave us our touch of Beetlejuice at the bottom of the garden, whilst keeping it in line with our own design style."

Cluroe and Whitehead designed two small tables and a wall-mounted disc from onyx offcuts found, via a video call, in the warehouse of stone company Solid Nature. The pink hue of the onyx is meant to complement the white timber structure.

A pair of 3D artworks by Atelier Bebop were also hung on the structure's back wall.

"In keeping with the ethos of our home interior, we wanted to reach out to our design community and make some new connections for the pieces that went into the space," said Whitehead.

"We designed the side table, coffee table and pink onyx wall plaque with Solid Nature, from waste pieces of natural stone that they had in their warehouse," he continued.

"It was a case of looking at what they had, via email and zoom, then making the most of those pieces. They are a touch of real extravagance, but they ground the whole space and add our signature use of colour to the space."

Now the pavilion and deck are complete, the pair use it as a retreat from the house which, like many people, they are still spending much more time in during the coronavirus pandemic.

"It's escapism in our back garden," said Whitehead. "The pavilion gives you the feeling of being on holiday when the light hits all the different lines of the woodwork."

"It's a welcome retreat and a reason to enjoy weeding the veg patch so we can enjoy a tidy kitchen garden when we sit out on the deck."

2LG Studio was founded by Cluroe and Whitehead in 2014. The pair revamped their Forest Hill home's kitchen back in 2018, adding a pink-tinged dining area that can double-up as a workspace.

Other recent projects by the studio include the overhaul of a period house in Tooting. Cluroe and Whitehead have also written a book that aims to empower people to embrace colour in interior design.

"We felt there was something that needed to be said about finding the freedom to live your best life and not conform but to embrace your style and free your home," said Whitehead at the time.