Paris-based Japanese fashion designer Kenzo Takada, the founder of the brand Kenzo, has died of coronavirus at the age of 81.

Takada passed away on Sunday 4 October in Paris, the city he called home since he moved to France in 1965 to start his fashion career.

Known for his use of bright colours and for bringing Japanese prints and textiles to Europe's catwalks, Takada was one of the defining fashion designers of the 70s and 80s.

Born in 1939 in Himeji to hotelier parents, Takada struggled to realise his dreams of being a designer in his homeland.

"I was once told that it was impossible for a Japanese man to work in the fashion industry in Paris," Takada once told the Financial Times.

"Men weren't allowed into design schools. Being creative was not accepted in Japanese society in the 1950s. And more than anything, my parents opposed the idea of me working in fashion."

Following the death of his father he left university and in 1958 was able to study at the Bunka Fashion College in Tokyo, which had just begun to accept male students.

When the Japanese government demolished his apartment to make way for the 1964 Olympics, Takada used the compensation money to buy a boat ticket to Paris.

Arriving in the French capital in 1965, Takada survived by selling design sketches to fashion houses and worked as a stylist.

In 1970 he rented a small shop and launched his first fashion collection. He called his label Jungle Jap as a nod to his country of birth and his love for the rainforest aesthetic. Takada painted the walls with jungle foliage in homage to Henri Rousseau's painting The Dream.

"One of the first paintings I saw in Paris and fell in love with was a jungle painting," the designer told the South China Morning Post. "That was the inspiration for the shop."

The shop was an overnight success after Elle magazine featured Takada's work on its cover that summer, and Takada rushed to hand-stitch more clothes. The next year Jungle Jap debuted in New York and Tokyo.

Takada's choice of brand name proved controversial in America, given the derogatory connotations of the word, even leading to a legal battle. Takada's trademark was upheld by the Supreme Court but he opted to rebrand. 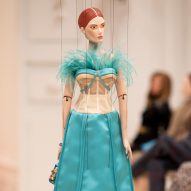 In 1976 the flagship Kenzo shop opened on Paris' Place des Victoires, offering clothes in flowing kimono styles in floral cotton prints. The designer was the toast of the fashion world, partying at Studio 54 in New York with Grace Jones.

Takada had a keen eye for theatrics and pioneered the showstopping fashion show-as-theatre event; in 1978 he held the Kenzo show in a circus tent and arrived on the back of a real elephant.

"Before Takada, western designers often plucked out influences from East Asia," said the Business of Fashion. "He flipped the script, reclaiming that heritage by updating whimsical Japanese floral and animal prints for European tastes."

As well as branching into menswear and children's collections, Takada broke into perfume and created, amongst others, the wildly popular Flower by Kenzo.

In 1990, when Kenzo was reaching the height of success, Takada entered negotiations to sell his brand to luxury French conglomerate LVMH. His business partner had suffered a stroke and the designer had lost his life partner, Xavier de Castella, to AIDS.

Takada remained at the label before retiring from fashion in 1999 at the age of 60, upon which he took up painting and designed costumes for the opera.

"For half a century, Mr Takada has been an emblematic personality in the fashion industry – always infusing creativity and colour into the world," said Kenzo CEO Sylvie Colin.

"Today, his optimism, zest for life and generosity continue to be pillars of our Maison."