The conflict between the Architecture Foundation-backed Antepavilions and the local council has exposed the tension between architects and the planners they should cherish, says Joseph Henry.

The current kerfuffle between Hackney Council and the Antepavilion project shows that architects still don't understand the role of planning and why it is a vital tool in designing and securing a high quality built environment for all.

The glee with which architects are enjoying the spectacle of a developer (Shiva, which organises the iconoclastic Antepavilion series in collaboration with the Architecture Foundation) ignoring planning requirements made me ponder what their reaction says about our profession. Maybe the accusation towards the Hackney planners that they don't have a sense of humour or get irony could apply to me too? Although I would present Sound Advice as evidence on the contrary.

Clearly, floating statuesque sharks in a canal aren't the most egregious architectural addition to London this year – one view of the City of London or almost any trip to a housing scheme outside of Zone 2 will prove this point.

The planning system isn't perfect and there are many intelligent ways of exposing its contradictions. Check out the Sub-Plan publication by David Knight and Finn Williams for an example of what I mean. But this battle is not one of them. For a start, the sharks were not a sophisticated way of commenting on the "authoritarian working of our planning culture", as its the deregulation of planning policy that is promoting an authoritarian free-market producing a tyranny of substandard housing on people without agency to move elsewhere.

Regurgitating Bill Heine's 1986 art commission and John Buckley's sculpture into an unsophisticated one-liner floating outside a private event space is not spatial and does not undermine the planning system – the original Headington Shark in Oxford ended up securing planning.

But my issue is more about the culture of city-making that this battle represents. The "f*ck planning and building control" attitude of the project's patrons is concerning. Imagine if this attitude was scaled up, beyond sharks to the rest of the city? Is this a city that we should be designing? And would this be somewhere that we would want to live?

We have seen through office-to-residential permitted development, what happens if the "free market" is left unchecked and the product that is developed without planning oversight and minimum standards. 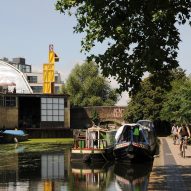 Architecture Foundation battles council to save Antepavilion structures from demolition

I'm not blaming the sharks, they are innocent bystanders in all of this. They are symbols of a problematic approach to city-making where the powerful can act without impunity. The motivation for the original shark "was to express someone feeling totally impotent and ripping a hole in their roof out of a sense of impotence and anger and desperation…" – maybe this is how architects feel about the planning system, but I would suggest that planning isn't about them.

Rather, it's about maintaining decent standards for everyone else. Anyone up for living in a twelve-square-metre flat? I wonder how the residents who live there might feel. Impotence, anger and desperation, perhaps?

Do architects really believe that they are working in opposition of planners? The current critique against Hackney seems like a waste of time when considering some of the issues in the city that we urgently need to resolve. Like the built environment's role in the climate emergency, or the erosion of minimum space standards through permitted development legislation and the creation of slum housing in our cities once more. Or maybe even issues of ensuring architects securing themselves more prominent roles in the construction quality of the schemes they design. Or campaigning for more equitable industry, perhaps? 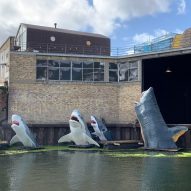 We should cherish planning, not because it stops every terrible building ever designed (surely those terrible architects and sometimes clients need to take responsibility for this, not just planners), but because it is a democratically accountable process that stops wealthy landowners and developers (or, as we would say in south London, "rich pricks") from doing whatever they want on their land and through their developments.

It is a system where the public has an opportunity to comment on how the city is developing around them. We have to walk by, interact with, look at what private citizens do on their land, so surely the process of what is built should be scrutinised transparently and in public.

Planners are dutiful to enforce planning policy on behalf of a particular area, in other words, a community

If anything, the democratic accountability and scrutiny of planning applications should be increased as there is still a lot of substandard development that isn't improving the public realm. Dodging hurricanes walking down Bishopsgate in the City of London's new micro-climate is an example of this.

Architects need to understand the planning system and accept that, while clearly flawed, it serves an essential purpose. It aims to ensure that everyone is following the same set of rules, meaning that yes you have to follow them too. It is hypocritical for architects to call out the government's new planning reforms for deregulating the planning system, but then complain when planning impacts one of their "visions" explaining "yes, but I know how to design though".

The planners are dutiful to enforce planning policy on behalf of a particular area, in other words, a community. Therefore, architects now need to decide who they really represent and who their responsibility of duty of care is for. I would have assumed – before the sharks, that it wasn't the "fuck planning and building control" mob. I thought it might be the people.

Joseph Henry is a designer and urbanist working in the public sector. He is a co-host of Sound Advice and advisor to Theatrum Mundi.
Read more: