Furniture brand Benchmark is producing a collection designed by Nottingham-based designer Mac Collins as a celebration of his connection to the African diaspora.

Collins developed his Iklwa chair when he was a graduate student and it has been produced as a consumer range just two years later.

The original throne-style chair has been spun into a collection, also called Iklwa, that consists of two chairs and a side table, developed together with British furniture maker Benchmark in ash and oak wood.

"It felt right to pursue this project with a maker based in the UK, without exporting production to areas of the world where I could guarantee cheap and potentially unfair labour, for increased profit margins," Collins told Dezeen.

The Iklwa collection was informed by ideas of Afrocentrism and Afrofuturism, references that come through in the throne-like shape of the chairs and the spear-like forms of both the chairs' armrests and the legs of the small side table.

Collins, who has British and African-Caribbean roots, said his ancestry informs aspects of his work and that he hopes to explore it through the creative medium of design.

"I am of the African diaspora and I wish to identify with that fact and celebrate it," he said.

"I am still drawing inspiration from stories told to me by the older members of my family," he added.

"There are some projects that this approach is more relevant than others, but I do hope to draw these contextual references into all of my work, to some extent."

"I am hoping to work on more speculative projects, pieces and collections where I can comment on aspects of my heritage and the relationship my lineage has with the society that I live in," Collins said. 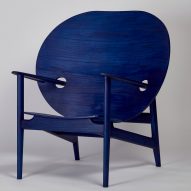 While his original design for the Iklwa chair has remained relatively unchanged, the colours in which it comes were updated for the new, commercially available collection.

The first piece was stained in a vibrant ultramarine shade, a colour that Collins has a "sentimental connection" to, but one which was difficult to replicate on a more commercial production level. It was set aside in favour of classic white oil and a warm orange hue.

"We did think there needed to be a standout tone for the collection to pay some kind of homage to the vibrant impact of the original piece," Collins explained.

"We landed on the orange – earthy vibrant but unobtrusive – synonymous with the vibrant orange, lustreless clay tones of red soil found in sub-Saharan Africa."

Iklwa's larger chair is the same size as Collins' original design, while the size of the smaller lounge chair was dictated by practicality.

"A smaller lounge chair, that shared the same visual language as the first, may be more appealing to a potential owner who does not have the space for the original iteration," he explained.

"The original piece was designed to put the sitter in a nonchalant and empowered sitting position – this consideration was then continued throughout the rest of the collection."

"The table suited the lounge atmosphere that the other two chairs had created, it made sense to keep the collection within a succinct imagined environment."

The emerging designer, who worked with Benchmark founder Sean Sutcliffe and Laerke Sutcliffe on the collection, said he collaborated with Benchmark as the brand uses non-toxic finishes and the products are made from certified timbers. 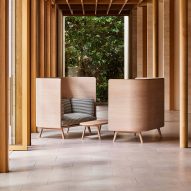 "The pieces are made for longevity, and Benchmark offers a repurposing service to combat throw-away culture within the furniture design industry," he said.

"However, were these pieces to be destroyed after their long life, their components would be entirely recyclable or decomposable."

Collins is now resident designer at Northumbria University, though the university is currently on lockdown due to the coronavirus pandemic, and also has a role teaching at Nottingham Trent University.

In the two years since Collins graduated, the Black Lives Matter movement has shone a spotlight on issues of racial diversity in a number of industries, including design, and the designer said he has noticed a change in the industry in terms of representation of BAME designers.

"There is a long way to go but these conversations are taking place all throughout the sector and through these discussions we will hopefully begin to see a change in the way the industry ticks," he said.

"It is a shame that it has taken the intense scrutiny of unjustified killings for us to take notice of interindustry biases and inequalities, but we must take full advantage of this situation and momentum."

The launch of his first consumer collection has made him feel "proud and hungry," Collins said.

"I feel proud that my perspective and narrative is being engaged with," he added. "It’s humbling to see creations of mine, out in the wild to be used and hopefully enjoyed."

Collins' Iklwa collection will be on show in the 300 Objects: An Inaugural Exhibition for Modern Day Patrons as part of London Craft Week until 10 October.

Benchmark was also part of the Dezeen x Planted collaboration, where the brand showed its latest sustainable collection made with David Rockwell.