London-based Heatherwick Studio has created a series of Spun chairs made of granite for its EDEN skyscraper, which recently opened in Singapore.

The architecture and design studio made a trio of Spun chairs, which it first created from spun metal in 2007, from an Austrian granite called Pannonia Verde for the plaza area that surrounds its residential EDEN skyscraper.

They were created after the building's developer Swire Properties commissioned the studio to design a sculptural piece of work for the skyscraper's gardens.

"Rather than create an object to look at, we wondered if it was an opportunity to make something that was beautiful and functional," said Tom Glover, project leader at Heatherwick Studio.

"As gardens are places for rest and contemplation, a seat seemed like a natural solution that would encourage people to either sit for a moment of quiet contemplation or to perhaps engage in a conversation with a neighbour," he told Dezeen.

The granite edition of the Spun chair is the latest version of the spinning top-shaped chair that the studio first made from polished copper and stainless steel in 2007.

Heatherwick Studio created a limited edition series for London's Haunch of Venison gallery in 2010 and went on to work with Italian manufacturers Magis to make a mass-produced version from rotation-moulded plastic in the same year.

The studio recently created a transparent version for Magis and is in the process of creating enamel, leather and cedar iterations of Spun.

"From its first inception, the studio had always intended the Spun chair to take on different iterations," explained Glover.

"Initially, we were thinking of it as something that would be made into a few limited edition pieces in different materials, each one bringing a unique set of qualities to the chair."

Granite was chosen for this outdoor version of the chair due to its hardwearing nature meaning it could withstand the tropical climate.

"When we got the commission from Swire's it gave us a motivation to explore materials that would be sculptural, beautiful and would withstand the tropical Singaporean climate, ranging from intense heat to monsoon rain and very high wind," said Glover. 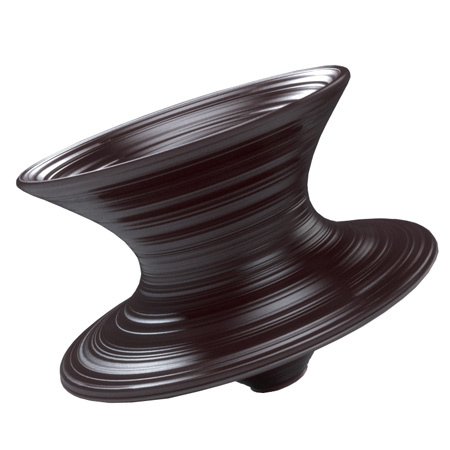 "The material also had to be very robust as the intention is for it to be outside for many, many years. We eventually chose Pannonia Verdi, a green granite from Austria. The challenge we then faced was how to craft the chair from such a hard stone."

Each of the three chairs was cut from a single piece of rock, carefully chosen for its colour and grain combinations.

The granite pieces were shaped in a process developed in collaboration with Italian fabricator Matter of Stuff on a giant CNC lathe with a six-axis cutting tool before being polished by hand.

As the chairs are extremely heavy they had to be attached to the ground and do not spin. However, as the seating surface is highly polished, the users can spin themselves within the chairs.

"The name initially responded to the process of making the original version which was born out of investigating whether a chair could be made using the traditional technique of metal spinning, but it also referenced to the act of sitting in a chair that spins," explained Glover.

"Whilst the granite chair is far too heavy to safely or comfortably spin, we realised once we had made a prototype that it's very satisfying to spin yourself around in the highly polished rotational form of this version. As a designer, it's a joy when these unexpected discoveries happen."

Beyond the granite, metal, enamel, leather and cedar iterations of Spun, Glover expects the studio to continue experimenting with making the form from other materials.

"Materials are at the core of everything we do and we are at heart a studio of makers and experimenters so it is not only fun, but the lifeblood of what we do as a studio," he said.

"We feel the Spun chair has an identity that has evolved beyond describing the process of making," he continued.

"We absolutely wouldn't want to be tied to a particular process when we still have things to discover and new techniques to learn and design is always about exploring and growing ideas and letting them lead us rather than putting self-imposed limitations on ourselves."

Heatherwick Studio was founder by Thomas Heatherwick in 1994. The studio's EDEN skyscraper has been shortlisted in the housing project category of this year's Dezeen Awards.

Recent projects by the studio include a modular desk modular with wooden planter legs unveiled at this year's London Design Festival and the plant-filled Maggie's Centre in Leeds.