OMA has developed a masterplan for a mixed-use neighbourhood in southeast London, UK, which will have workspaces, a riverside park and more than a thousand homes.

Named Morden Wharf, the scheme has been developed by Dutch studio OMA with real estate developer U+I for a 2.4-hectare site on Greenwich Peninsula, adjacent to the Richard Rogers-designed O2 Arena.

The neighbourhood will introduce 1,500 homes, a mix of industrial and makers' workshops, and a landscaped park that stretches 275 metres along the River Thames.

OMA's inclusion of makers' workshops and industrial workspace in Morden Wharf pays homage to the industrial heritage of Greenwich Peninsula. The design of and entrance to these spaces will be overseen by London studio Chetwoods.

The masterplan also harks back to the site's pre-industrial history as marshland and will place emphasis on landscape design to tackle the deficit of open, green space in the area.

"Morden Wharf is designed to foster community and has the right mix of uses to create a successful and vibrant neighbourhood, all stitched together with a beautiful public realm," said OMA partner Reinier de Graaf.

"We have drawn design inspiration from Greenwich Peninsula's industrial heritage – from the warehouses and silos that once sat on the site, to the iron lattice structure of the gasholders," he added.

"We have also looked back further, to the original marshland landscape of the peninsula, and in creating the park and public realms we are seeking to return the post-industrial landscape to a more natural and ecologically diverse condition.”

Morden Wharf's landscape design incorporates a number of spaces for play and recreation, alongside a public square for seasonal events and markets.

The riverside park will feature a small beach and be connected to the existing Thames Path, which will also be upgraded and widened as part of the scheme.

While OMA intends for the neighbourhood to cater almost exclusively to pedestrians and cyclists, there will be hidden, underground car parking facilities.

Alongside the proposed makers' spaces and industrial units, the masterplan will also include office spaces dedicated to small enterprises and creative businesses. These will also be overseen by Chetwoods, with some housed in existing buildings on the site. 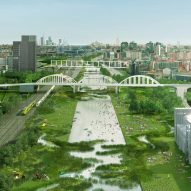 Morden Wharf's housing design includes approximately 1,500 residences, 35 per cent of which will be deemed as affordable and many will be developed for families.

Details about their materiality are yet to be disclosed, though the homes will be contained in towers with green facades to "provide natural screening and improve air quality". The creative workspaces will be housed in buildings with a more industrial aesthetic.

Proposed construction dates for the scheme are yet to be revealed, but plans were submitted for approval in June 2020.

As part of the project, Carmody Groarke has also designed a boathouse on an existing jetty, which is intended as a permanent mooring spot for Gloriana, the Queen's Rowbarge.

Elsewhere, the studio is also developing a rural culture complex in Melbourne, a garden bridge for Washington DC and a masterplan in Milan that will turn two abandoned goods yards into public parks.