Køge Nord Station crosses two rail lines and eight motorway lanes and was created by Cobe and Dissing+Weitling for a new high-speed train line from Copenhagen.

The two studios designed the railway station as a snake-like footbridge that connects two important train lines – a high-speed rail line and a suburban rail line – and runs above Denmark's busiest motorway.

It has been shortlisted for the Dezeen Awards 2020 in the infrastructure project category.

Køge Nord Station, which is located in a new city district in Køge, Denmark, was required to be in direct connection with a park-and-ride facility to help create more sustainable travel routes.

This enables commuters to park their cars and take the high-speed train to Copenhagen, which is 35 kilometres away.

"Being visible to more than 100,000 motorists and passengers every day, the station should have iconic qualities, simple, yet distinctive, and blend well into the landscape," Steen Trojaborg, managing director at Dissing+Weitling, told Dezeen.

"We approached the brief by deciding to aim for a design that would create connectivity between the many different functions of the station area in an effortless manner, and by focusing on creating a pleasant and attractive environment for the passengers using the station," he added.

"The goal was to celebrate public infrastructure – and the joy of travel – by pursuing the iconic qualities of the station sought after in the brief."

The brief called for a covered, pedestrian bridge and the studios chose to design an elliptical cross-section in order to give the 225-metres-long footbridge a simple, unifying expression.

It is accessible by five elevators and stairs that protrude from the softly bent, aluminium-clad cylinder.

"The station is more often than not perceived at motorway speed, which calls for a restrained outer geometry and limited use of different materials, in this case being aluminium cladding," Cobe founder Dan Stubbergaard told Dezeen.

Its soft s-shape was based on the station's surroundings, as the aim was to connect a view to the water at Køge Bay to the east and a view over the woods to the west.

"The forecourts and park-and-ride-facility are designed to preserve these views even when future urban development is to take place," Trojaborg said.

Large panoramic windows frame the views at either end of the bridge, while the facades serve as a sunshade.

Cobe and Dissing+Weitling chose durable industrial materials for the footbridge, which is made from concrete and aluminium with structural steel elements.

"On the inside, we chose oakwood cladding to introduce a softer, warmer, more pleasant feeling, as to wrap and protect people walking across two rail lines and eight lanes of motorway," Trojaborg said.

"The architecture stimulates the good travel experience by both open prospects and intimacy, movement and zones for taking a break."

Both Cobe and Dissing+Weitling have worked on infrastructure projects before Køge Nord Station.

"In our view, infrastructure is public space," Stubbergaard said.

"Public space belongs to all of us, it is where we meet and interact, and it is an important part of what tie communities together and create coherence between us as individuals," he added.

"When treated with attention and respect, and from a people-centric viewpoint, designing public infrastructure and the public spaces in connection with it can have a great impact on many people's lives. We aim to create extraordinary everyday spaces."

An average of 8,000 people are expected to use the station every day. 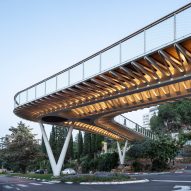 Other projects shortlisted for the Dezeen Awards 2020 in the infrastructure category include the Technion Entrance Gate, a bridge designed to be a new public platform, and the Bunhill 2 Energy Centre that uses heat from the London Underground to warm nearby homes.