Israel studio Schwartz Besnosoff Architects has completed the Technion Entrance Gate for the Technion Israel Institute of Technology in Haifa, which also acts as a bridge that connects the campus with a city promenade.

Instead of designing the entrance gate as solely a barrier between two points, Schwartz Besnosoff Architects created a new public platform.

"The traditional campus gate has a significant role in the disconnection that criticises the university campus and the urban context that surrounds it," Schwartz Besnosoff Architects architects Gaby Schwartz and Omri Schwartz told Dezeen.

"After analysing the exiting potentials on site, we decided to offer a new interpretation to the idea of a 'gate' – not a barrier or a separator but as a bridge, a new public platform, that connects the city and the campus through a green promenade."

The studio was chosen for the project after winning an open competition held by Technion and the Israeli architecture association, and worked with Studio Rolka on the concept.

It identified a number of potential starting points when planning the project, including an existing campus promenade next to the entrance and an urban promenade that ended just outside.

The entrance gate now ties these two together in the form of a pedestrian and bicycle bridge, which is elevated above an existing road and was designed using parametric software.

Where the bridge widens, after the security checkpoint, the studio designed a new informal square where students can meet their friends.

"Sport and leisure are just some of the day to day activities that take place at the new gate both by campus students and nearby residents," said the studio.

"The bridge acts as a dynamic platform that enables the campus to host various types of events and to explore the potential of the new connection between the city and the campus."

Technion Entrance Gate was built from metal with added bamboo decking and glass panels, materials that were chosen partly for their sustainable qualities.

"The bridge structure is made from exposed metal using the basic structure as the finish exterior for the gate," the studio explained. 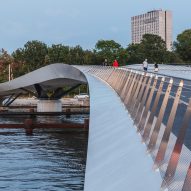 "In this way we reduced the use of cover materials to the minimum. The decking of the bridge is custom made from bamboo decking which is one of the fastest growing, renewable resources in the world," it added.

Even though the Technion Entrance Gate isn't a traditional gate, it still has to fulfil the functions of a gate.

A glass pavilion, which was placed to the side of the bridge and extends over it, contains an elevator and two checkpoints. Pedestrians and cyclists can also use automated speed gates that open with a magnetic card.

"The gate is equipped with the most advanced technological systems that enables the security team to seat in the centre of the campus with minimum guards standing outside but still to have a full control on the entrance gate," said Gaby Schwartz and Omri Schwartz.

The Technion Entrance Gate has been shortlisted in the infrastructure project category for Dezeen Awards 2020, where it will compete against projects including the Bunhill 2 Energy centre in London, which uses excess heat from the London underground to heat buildings, and the Lille Langebro bicycle bridge in Copenhagen.