Located at a prominent site in the city's central business district, the 164-metre-high Collins Arch contains apartments, a hotel, offices and public facilities.

Its glass-lined arched form was developed from the inside out to ensure that every space has ample natural light and views outside.

According to Woods Bagot and SHoP Architects, the result is a dramatic landmark that simultaneously "settles comfortably into the skyline".

"It maximizes views and sunlight for office, hotel and residential occupants of the two buildings that, on the ground, meet public space and commercial requirements," he said.

"The ground plane was always where the project started; the building's form was a result of the program."

Woods Bagot and SHoP Architects won a competition to design Collins Arch in 2014, which was initiated by Cbus Property.

The competition called for a landmark development for Collins Street – a major road in Melbourne with a mix of heritage buildings and skyscrapers. 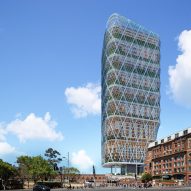 According to the studios, its diverse programme makes Collins Arch the first "truly mixed-use building" in Australia.

"The project is born of two key, complementary ideas: an urban design rationale that links it to a larger public space network; and a concept for mixed-use development that privileges the activation of the ground plane to create a landmark destination," added Woods Bagot's CEO, Nik Karalis.

The pair of Collins Arch towers both rise 164 metres and comprise 34 storeys, united at the top by the eight-storey skybridge that measure 14 metres in length.

Though their forms differ slightly, they each taper upwards as they extend to meet the skybridge. This gives rise to a series of spacious terraces.

The tower on the west side of Collins Arch contains approximately 49,000-square-metres of office space, while the east tower houses the hotel.

Their upper levels and connecting skybridge contain the apartments, which range from one-bed flats to penthouses, alongside a pool, gym and sky garden.

As part of the project, Woods Bagot and SHoP Architects collaborated with Oculus to develop open and green public spaces at the base of Collins Arch for workers, residents and the public.

Alongside a colonnade of shops, bars and restaurants, this includes a central courtyard, a covered amphitheatre and a 1,900-square-metre park.

Named Market Street Park, this is positioned adjacent to the site and is the first urban park to have been introduced to the city centre since the 1980s.

SHoP Architects is developing another tower, this time in Sydney, which will be the "world's tallest hybrid timber building" when completed.

Photography is by Trevor Mein unless stated. Drawings are courtesy of Woods Bagot and SHoP Architects.