Nordin, who is also a founding member of Greenpeace Sweden, spoke to Dezeen's founder and editor-in-chief Marcus Fairs about Bolon's stance on plastic and its vision for a more sustainable future.

Nordin's career within the field of climate action spans more than 30 years.

In 1982, after graduating from Umeå University with a bachelor's degree in Organic Chemistry, Håkan helped to establish the Swedish arm of non-governmental environmental organisation Greenpeace.

In 1990, he founded Miljökompassen – one of the first environmental consultant companies in Sweden.

Håkan has also served in various roles and committees for the Swedish government and advised brands such as H&M and IKEA on how to improve their sustainability strategies. 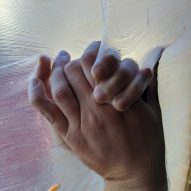 The discussion, which was produced by Dezeen for Bolon, forms part of Rethinking Plastic – a two-year programme of talks, workshops, exhibitions and excursions running from September 2020 until December 2022, which aims to readdress our relationship with plastic.