Plastic can help create more energy-efficient products that reduce the need for fossil fuels, according to Håkan Nordin, head of sustainability at flooring company Bolon.

Nordin called for a re-evaluation of plastic, which he described as "a very resource-efficient material that you can use for lots of things".

"I think that plastic is a part of the solution," said Nordin, a former climate activist who co-founded the Swedish branch of Greenpeace.

Plastic can be used "without climate impact"

Nordin spoke to Dezeen in a live interview last week, in which he unveiled Bolon's strategy to reduce waste and climate impact by 50 per cent by 2028.

The Swedish company, which makes woven vinyl flooring, has already switched to using renewable energy at its manufacturing plant and recycles waste plastic back into its products.

"All our production has zero climate impact, which we are proud of," said Nordin in the talk, held to mark Bolon's involvement in the Embassy of Rethinking Plastic at Dutch Design Week last week.

"Our goal is now to offer supreme products that are a part of circular material flow, safe for humans and nature with zero climate impact" 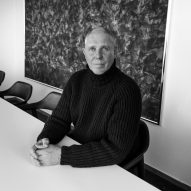 Nordin said that 90 per cent of the world's fossil fuels are currently burned to produce energy, a process that is the main driver of climate change.

Of the remaining fossil resources that are not burned, half is turned into plastic, with the remainder used to produce chemicals.

Two-thirds of all plastics are used to make disposable products and packaging, Nordin said, while around a fifth is used to make what he described as "construction plastic".

This is used to make "long-lived products that you use for years. It's in computers, cars and buildings."

Construction plastic can help reduce the amount of fossil fuels that are burned, Nordin argued.

"It's light, strong, easy to form," he explained. "It's resource-efficient. And it actually reduces climate change," when compared to heavier materials that require more energy during manufacturing.

Steel, for example, needs to be heated to around 1,000 degrees Celsius before it can be forged, whereas lightweight thermoplastics can be moulded at around 200 degrees.

"In a modern car there are about 200 kilogrammes of construction plastic, which makes the car lighter," he added. "And when the car is lighter, it needs less petrol."

Plastic controversial in the design world

Other examples Nordin gave include wind farms, which are more efficient when turbines have plastic blades; and electronic products, which contain large amounts of plastic.

The use of plastic is a contentious issue in the design world, with some figures believing its use should be phased out entirely to prevent pollution.

Industrial designer Richard Hutten clashed with Andrew Morlet, CEO of circular-economy advocate the Ellen MacArthur Foundation, at the Dezeen Day conference last year when Morlet described plastic as an "amazing material" that could be endlessly reused with the help of new recycling techniques.

However, Hutten described the claim as "bullshit" and described plastic as "the cancer of our planet."

In an interview with Dezeen earlier this year, Parley for the Oceans founder Cyrill Gutsch said that plastic was incompatible with the circular economy and new materials needed to be developed instead.

But turning oil, gas and coal into plastic and using the material according to circular principles is ultimately better for the environment than burning fossil fuels, Nordin argued.

Nordin was doubtful about the potential of bioplastics, which currently make up one per cent of all plastics, to replace fossil-based plastics.

Produced from specially grown crops, bioplastics require large amounts of land and so could compete with agriculture, timber plantations and the need to retain natural landscapes to retain biodiversity and absorb carbon from the atmosphere, Nordin said.

"There'll be competition when it comes to what we grow and how we use [the land]," he said. "And we have a perfect resource [for plastic] that is oil."

"If we use the oil in a circular material flow, I think it's very efficient to use it and we don't have competition with forests and crops."

He was also cautious about biodegradable and compostable plastics since these cannot be recycled and need to be carefully separated from regular plastics.

"If you mix them you're going to be in a tricky situation," he said, instead calling for "more circularity of the atoms" via chemical recycling, which breaks down the long molecular chains in polymers so they can be used again.

This emerging technology, which could eventually replace expensive mechanical recycling, would help put plastics on a par with metals such as copper and aluminium, which are commonly melted down and resold at affordable prices.

"You can't say that I want to buy recycled copper," he said. "You buy copper and there's a portion of it that is recycled."

After completing a degree in organic chemistry, Nordin joined Greenpeace in 1982 and later founded Miljökompassen, one of the first environmental consultancies in Sweden, in 1990.

He advised the Swedish government and brands such as H&M and IKEA on their sustainability strategies before joining Bolon two years ago.

Nordin, who started his career as an environmental activist protesting against many of the companies he now consults with, said that large corporations are increasingly taking environmental issues seriously, integrating sustainability into their businesses rather than treating it as a peripheral activity.

"I see lots of things happening," he said. "Good things."