A multi-room stand designed by Snarkitecture at Stockholm Furniture & Light Fair features in this captioned video produced by Dezeen for flooring brand Bolon.

New York-based design studio Snarkitecture created the labyrinth-like booth to showcase the Swedish brand's flooring products and offer visitors a chance to interact with them.

Bolon is a design company and flooring producer known for its durable woven vinyl material, which has been used in project with collaborators such as Neri&Hu, Missoni and Jean Nouvel.

The material was displayed on the floor, outer walls and furniture of the installation.

Snarkitecture's postmodern design featured a multiplicity of arched doorways and mirrors, creating a number of different rooms through which visitors were led.

The booth was an interpretation of Bolon's new brand concept The Art of Performance, and is intended to demonstrate the material's core attributes of "designability, sustainability, cleanability and durability."

Tactile exhibits and video displays throughout the stand showed how Bolon's woven vinyl flooring material is made and demonstrated its properties, as well as showing how the brand recycles production waste to create new products.

The company was founded in 1949 by Nils-Erik Eklund, grandfather of current directors Marie and Annica Eklund, who collected waste material from local factories to make rugs. 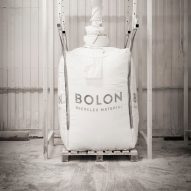 Snarkitecture, known for its playful and interactive multidisciplinary projects, has previously installed a giant bouncy ball playground on Hong Kong's waterfront and filled a space at the Hudson Yards development in New York with spherical orbs that light up in a blue hue when touched.

The stall was on display from 4-8 February at the Stockholm Furniture & Light Fair.

Bolon's flooring was also installed at the event spaces of the furniture fair, at which Dezeen hosted and streamed a filmed talk with London design studio Doshi Levien.