Architecture studio Farrells has unveiled a group of six interconnected skyscrapers at the heart of the Qianhai district in Shenzhen.

Named One Excellence, the group of skyscrapers are built on reclaimed land alongside Qianhai bay to the west of downtown Shenzhen as part of the development of the Qianhai district.

Farrells designed four office towers and two residential towers as a central hub for the development, which is intended to house one million people.

The office skyscrapers include a pair of 180-metre-tall "gateway towers" that are connected by a curved glass canopy.

"The gateway towers play an important role in shaping the emerging city, through welcoming visitors and signifying the beginning of the next chapter in Shenzhen’s unprecedented growth," said the studio.

The remaining four skyscrapers, which includes the 300-metre-high "landmark tower" are connected by a series of bridges described by the studio as "multi-level streetscapes".

These bridges will link the skyscrapers and a series of low-level buildings that contain shops, cafes and restaurants and a metro station entrance. 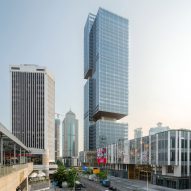 "We have created a rich and varied network of urban spaces that cultivate a strong sense of place, encourage interaction and an organic flow of pedestrians in the area," continued Krummeck.

"This sensitive thinking is balanced with a series of architectural highlights and memorable landmarks, which add to the district's cityscape."

The two residential skyscrapers, which contain serviced apartments, are connected at the 27th floor by a "sculptural clubhouse".

As well as One Excellence, Farrells is designing five further towers in the Qianhai district and also collaborating on the design of ten stations of the Qianhai Metro.

The district faces out to Qianhai bay where architect NBBJ is designing a car-free district named Net City, which is "roughly the size and shape of Midtown Manhattan".

Photography is by Rex Zou and Eric Cheung.