UK studio Gruff Architects has created a four-bedroom house in south London that has a first floor that is clad in black timber and overhangs its driveway.

Built on the site of a builder's yard behind a row of Victorian terraced houses in Brockley, Pitched Black was designed for one of the Gruff Architects' directors – Rhys Cannon – and his partner.

The studio wanted to create a family house that was appropriate to its site alongside a railway line and in a conservation area, but also had an element of fun.

"We sought to create a fun, experimental building that responded to its surroundings and created a sense of enclosure and privacy that maximised the potential of its unusual location, perched atop a railway cutting," Cannon told Dezeen.

"But ultimately the core concept was to create a family home and a haven from the hustle and bustle of London life."

The home has a brick ground floor above a concrete basement, with a first floor that is clad in black timber boards and pitched at a 10-degree angle away from the site boundary.

This angled upper storey projects out from the brick base to the side of the building where it is supported on angled blue columns to create a covered entrance to the house. This creates a dramatic view of the house from the street as well as protection for a car turntable.

"The tight site constraints and narrow track access meant that parking and turning a car on-site was always going to be tricky," explained Cannon.

"Our solution was a car turntable right outside the front door, with the building's upper storey floating over the top, creating a multi-purpose covered outdoor area, acting as sometimes parking; garden extension; covered play area and an inviting entrance sequence into the main house."

The blue angled legs were an example of how Gruff Architects added fun elements to the home while solving the practical problems created by the enclosed site.

"Pitched Black's legs were a means to resolve the angular upper levels being brought back to the ground and became a deliberate expression of this transition," Cannon said.

So as not to overlook the surrounding homes, all of the windows in Pitched Black either face towards the side or the rear, which faces the railway cutting.

On the ground floor, the house's open plan kitchen and living space has large glass sliding doors that open onto the rear garden. A timber stair leads up to the first floor bedrooms, while a further guest room and home office are located in the basement.

As well as creating a home for his family, Cannon also used the design to experiment with both the home's form and the materials used to create it. The studio used its own CNC machine to cut the formwork for the concrete around the base of the blue legs, as well as the brass details inside the house. 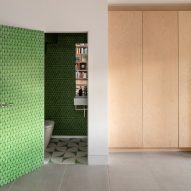 "Small London sites can be challenging and always require unique, innovative solutions, above and beyond your average Victorian terrace extension," he added.

"We had the incredible opportunity to experiment and use Pitched Black as a testing ground for the practice's interests in craftsmanship; materiality and form-finding, using our own in-house workshop and CNC to create bespoke elements that add additional layers of detail to the building."

Overall the architect hopes that the home will be an interesting place for his family to grow up in.

"You don't put a turntable for a car in a house if a sense of fun isn't there," said Cannon.

"After all this is a house for myself and my family to live in, not a minimalist retreat so more accurately it puts a bit of fun in functionality," he continued.

"Unsurprisingly the kids have found ways to use and enjoy the house and nooks and crannies within to their infinite enjoyment."

Gruff Architects is a London-based studio that was established in 2010. It has previously overhauled a 1930s London terrace adding birch joinery and colourful accents and won the award for best architect's website at last year's Archiboo Web Awards.