UNStudio, Zaha Hadid Architects, White Arkitekter and Gruff Architects, were named among the winners of the Archiboo Web Awards 2019, which spotlight the best websites belonging to architects and architecture companies.

Gruff Architects picked up the award for best overall website, with judges praising the emerging studio "for using the website to make the practice much more the sum of its parts, but without overclaiming".

The site, which was designed by TM, was also called "playful and experimental – a real treat for the user across all devices and browsers".

The annual Archiboo Web Awards, now in its fourth year, was founded by former BD magazine editor Amanda Baillieu to celebrate architecture companies that are using the internet in a creative way.

This year saw a record 250 entries across the 13 different categories covering visual design, user experience, use of technology and social media.

Winners were announced in a ceremony at The Royal College of Pathologists yesterday evening, when Gruff Architects also scooped up the prize for best mobile experience.

The judging panel said that the studio's mobile presence gave "an instant snapshot of the practice's design ethos and feels crafted and carefully thought through". 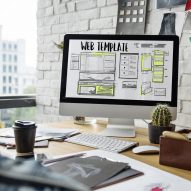 Among the other winners this year was Swedish studio White Arkitekter, which was given the award for the best homepage that was created by Creuna.

Meanwhile the "most competitive of all the categories", best visual design, was won by Threefold Architects for its site designed by Studio Thomas. The panel said the site was "calm and inviting, and the navigation and overall presentation of content conveyed a rational approach, giving a feeling of who the practice is".

Zaha Hadid Architects Virtual Reality Group was another winner, picking up the prize for best use of technology and "pushing the boundaries of virtual reality and its application to the architectural field".

Best use of video went to UNStudio – a recipient of two Archiboo Web Awards in 2018 – for its mini documentary on Arnhem Central Station.

This year, the awards also saw the introduction of three new categories: Best Consultants, Best Architectural Photography and Best Newcomer. These were given to Friendly Materials by PMMT, Manalo & White and Morris+Company respectively.

Morris+Company's website, built by BOB Design, was applauded for being "awash with colour, textures, patterns and emotion, sending out messages of sharing, research and innovation".

Another new prize was The Alan Davidson Award, given in memory of the architectural visualisation pioneer Davidson. This was awarded to the creative digital studio Squint/Opera.

Judges said it the studio's "playful narrative and the use of illustrative elements, together with realistic CG animation, gives a real sense of the spaces".

At the event, Baillieu explained that "architects are increasingly using their websites and social media channels to explain what they do, not just talk to other architects."

She concluded that "the winning entries are exploiting everything at their disposal to tell their stories from animation and video to drawings and words. It's this patchwork of things coming together each with their own personality that we found really appealing".

Heatherwick Studio was also given award for its website, which was described as having a "distinctive and confident aesthetic which communicates a message that is recognisably relaxed and original but still good on detail".