A bridge to the White House and man-made islands are among the conceptual proposals five architecture studios have developed for preserving Washington DC's Tidal Basin reservoir and the National Mall.

Set between the Potomac River and the Washington Channel, the Tidal Basin is intended to capture 250 million US gallons of water (946 million litres) from the river and release it into the channel twice a day. It is now threatened by a crumbling sea wall and flooding caused by rising sea levels.

The scope of the ideas lab also encompasses the neighbouring National Mall, America's most visited national park, which is home to some of the capital's most famous landmarks including The Lincoln Memorial, The Washington Monument, The Jefferson Memorial and Martin Luther King Jr Memorial. 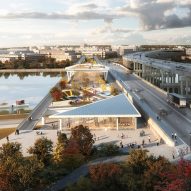 "As part of 'America's front yard', the Tidal Basin is home to some of the most iconic landmarks and traditions in the nation's capital," said National Trust for Historic Preservation's Katherine Malone-France.

"Yet current conditions do not do justice to a landscape of such significance," she explained.

"These ideas explore ways to sustain this cultural landscape and its richly layered meanings for generations to come. This isn't preservation as usual: this is preservation as innovation."

Read on for the five concepts:

James Corner Field Operations, the landscape architecture studio behind New York's High Line park, has proposed creating an earthwork levee to build up the site surrounding the basin and form a path around it.

Called Protect and Preserve, this is one of three options it developed for the project. Among the others is a proposal for  a series of islands on the water to protect monuments.

DLAND studio's interventions to mitigate the effects of rising sea levels include a "green security wall" to protect monuments, an elliptical reflecting pool that would change the curvilinear shape of the basin and a bridge across the basin between Jefferson Memorial and the White House.

"The proposed design radically re-imagines the land of the Tidal Basin area in form and function, as a phased response to the sweeping, inevitable wave of climate change-driven transformation," said the Brooklyn-based studio.

Seattle landscape architecture firm GGN has proposed a scheme that would be developed in increments up until 2090. This will include building up the ground level to protect against water changes, and creating tidal marshes for natural habitats and boardwalks for people.

"Growing numbers of visitors will have more options for spaces to gather, which will ease pressure on the currently over-trodden landscape of the Basin edge," GGN said.

This creative approach by Oakland's Hood Design Studio reimagines the site in a four-part novella shown in a comic-like strip.

Relocating the site's well-known cherry trees, a future in which the basin is intentionally flooded, and a monument to the "hush harbors" wetlands where enslaved people secretly met to worship are among the suggestions.

The Cherry Walk bridge, which would lead through the site of the relocated cherry trees, is among Reed Hilderbrand's main proposals – others include a bridge to the city and a new land form to protect against rising water.

The landscape architecture studio, which is based in Cambridge, Massachusetts, developed the proposal based on the 1902 McMillan Plan for Washington DC's parks and monumental core.