Architecture studio Generate has developed the Tallhouse library of timber-based building systems to help architects build affordable housing and reduce construction-related carbon emissions by up to 50 per cent.

The architecture, engineering and construction company developed the online catalogue to provide architects with pre-engineered, timber-based construction systems that they can adapt for large-scale projects.

These designs can each be used as a "kit of parts" for buildings ranging from eight to 18 storeys.

"Generate partners with architects and developers to digitally integrate these systems into their residential and commercial projects," Generate CEO John Klein told Dezeen.

"Working with pre-vetted, replicable systems enables significant acceleration in project delivery, while permitting architects to spend more time on the creative process of design, resulting in the delivery of at once higher-quality and cost-effective projects."

The project was conceived in response to a shortage of affordable housing and with an aim to reduce carbon-output in Boston. With buildings accounting for 40 per cent of all greenhouse gas emissions, Tallhouse offers digitally available designs with low carbon footprints.

"In parallel, the city intends to have reduced its carbon footprint by 80 per cent in 2050 – an unachievable goal if the status quo of carbon-emitting structures is preserved."

The four systems are based on heavy timber because it is more environmentally friendly than other materials – largely because it does not create as many carbon emissions in manufacturing and it also acts as a carbon store.

The systems can offer large reductions in carbon emissions, according to the team.

"Novel construction technologies, like mass timber, take time to become widely adopted and integrated into the built environment," he added.

Each Tallhouse design is evaluated by a Carbon Data Analysis tool, called Tally, to provide architects with information on the implications of building materials and systems and help them choose options to produce fewer greenhouse gas emissions. 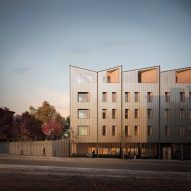 The systems are intended to be used like a replicable kit of parts that can be integrated into designs. They also come with a prefabricated panelised exterior wall system, modular bathroom and modular kitchens, and prefabricated mechanical, electrical and plumbing assemblies.

Tallhouse is the latest project by Generate to use wood to create more environmentally friendly buildings.

It has also worked with developer Placetailor to design a carbon-neutral apartment block in Boston using a cross-laminated timber kit of parts.

Other ventures exploring the limits of timber construction include a digital model of what would be the world's tallest mass-timber building by Alphabet's Sidewalk Labs.