Norm Architects has completed Archipelago House, a pine-clad holiday home on the coast of Sweden that's designed to embody both Scandinavian and Japanese aesthetics.

Copenhagen-based practice Norm Architects created Archipelago House, which is located just north of Gothenburg, for a couple and their four children.

It's a stone's throw away from a holiday home that the mother of the family frequented when she was younger.

Archipelago House comprises a quartet of pine-wood volumes that stagger in line with the site's rocky terrain.

Each of the volumes features gabled roofs, subtly mimicking the form of the boathouses which appear along the nearby seashore.

"We like to consider the spirit of a place and integrate a new building structure more or less flawlessly into its surroundings,"  partner at Norm Architects Frederik Werner told Dezeen.

"The building should look natural to the site and put the focus on the beautiful surroundings and the life unfolding in the place rather than the building itself," he continued.

"It is important for us that architecture does not feel alien to a site – especially in a place like this where there is a perfectly harmonised small village on the shore with other wooden houses around."

Inside, the practice has used natural materials to devise a sequence of muted, pared-back living spaces that nod to traditional Scandinavian and Japanese aesthetics.

Handleless oak cupboards feature in the home's kitchen, at the centre of which is a jet-black breakfast island with in-built drawers. Stone tiles have then been used to line surfaces in the bathrooms, which have been finished with dark-wood vanity cabinets.

The influence of Japanese design can be observed most clearly in the home's double-height lounge, which is dressed with furniture that Norm Architects has produced in collaboration with Karimoku Case Study – the sister brand of Japanese manufacturer Karimoku.

This includes a pebble-grey sofa, stone-topped coffee table and pair of armchairs that boast arching backrests upholstered in creamy fabric.

Archipelago House is the third project that the brand has worked on since its launch in 2019, joining the Kinuta Terrace apartment block in Tokyo and the Blue Bottle Coffee cafe in Yokohama.

The home's living area also has a delicate cone-shaped lantern that was created bespoke for the project by Kojima Shouten, a Japanese brand that has been making lanterns for over 230 years.

Crafted from washi paper, the lantern's peaked form is meant to act as another reference to the architectural form of Archipelago House. 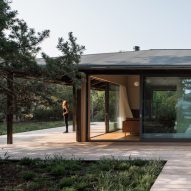 More squat lanterns that balance on four-legged stands appear in the home's tranquil sleeping quarters. Here there are also book-like storage boxes that Norm Architects designed alongside Danish brand August Sandgren, where inhabitants can tuck away their personal trinkets.

Beyond the home's dining room lies an expansive outdoor deck where the family can play games or enjoy alfresco dinners with views of the adjacent sea and small, rugged islands.

"Nature plays an important role in our soft minimalist approach, where we believe that buildings should be a functional backdrop and structure for human engagement," added Werner.

"It might be a romantic relationship with nature – but after all, that is why we want to escape the city once in a while and reconnect with nature in our holiday homes."

The practice's Archipelago House joins a number of getaway homes in scenic Sweden – others include Summerhouse Solviken by Johan Sundberg Arkitektur, which is raised up on steel stilts, and Villa Vassdal by Studio Holmberg, which boasts minimal plywood interiors.

Photography is courtesy of Jonas Bjerre-Poulsen of Norm Architects.