A tropical garden can be seen from within this spa in Sukhumvit, Bangkok, which architecture studio Space Popular has designed with soothing green and white treatment rooms.

Infinity Wellbeing is set within a building on one of the side streets, or "sois", that lead off Sukhumvit's main road.

It is entered via a luscious garden planted with dragon trees and lipstick palms, which Space Popular hopes will offset the shops, food vendors and towering skyscrapers that cluster around the spa.

"Designing the arrival and departure sequence is perhaps the most challenging element as the interior ambience is highly contrasting with the bustling street atmosphere in Bangkok," the studio's founders, Lara Lesmes and Fredrik Hellberg, told Dezeen.

"Through the leaves of the garden, the spa is in strong contrast to the street with its often chaotic collage of sounds and sights."

The leafy plants also help obscure views through to the interior of the spa, where the studio has continued the calming ambience by utilising a serene colour palette of off-whites and pastel greens.

Lesmes and Hellberg were particularly inspired to use the colour after coming across a local green-hued marble.

At the centre of the reception area is a fluted white service counter. Sheer white curtains have then been hung at the peripheries of the room, serving as a backdrop to customer seating areas.

The accompanying armchairs, recliners and bar stools are all from Space Popular's latest range of furniture called The Second Collection. Each piece features a tubular mint-green framework and "petroleum-blue" upholstery.

Green tube-like bases also feature on the stone-topped side tables dotted throughout the room, which also come as part of The Second Collection. 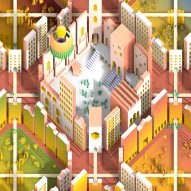 A contrasting pop of colour is provided by the copper-tone grid that runs across the reception's backlit ceiling. Stems of the grid extend down and away from the ceiling to form overhead lamps.

Corridors lined with mint-coloured timber louvres lead through to Infinity Wellbeing's white-painted treatment rooms, most of which have been finished with vanity stands and washbasins crafted from green terrazzo.

The garden-facing massage rooms are slightly moodier in tone – walls are clad in dark teal acoustic panels, while packaging foam is used to create coffered ceilings. Space Popular said it wanted to juxtapose high-end and humble materials like this from the outset of the project.

"It's a contrast often seen throughout Bangkok, which despite its abundance of luxury and shine manages to maintain its agility and inventiveness through its market and street food culture," the studio explained.

Only one of the treatment rooms, which boasts sandy-pink walls, diverts from the colour palette seen in the rest of the spa. It also has a dramatic tiered ceiling which staggers upwards into a cone-like shape.

"[The room] had very particular constraints due to where it was located – it doesn't face the garden – so we decided to turn it into its own world," added Space Popular.

This is the second branch that the studio has designed for the spa company. The first location, which is simply titled Infinity, was completed back in 2017. It's situated in Bangkok's Bang Rak district, occupying a pair of traditional Thai shophouses.

More recently Space Popular has designed the venue for Punto de Inflexión, the first-ever architecture conference to be held in virtual reality.