Held on 21 and 22 October and featuring speakers including Peter Cook and Carme Pinós, the Punto de Inflexión conference was held in nine virtual rooms set out in a grid inspired by Barcelona's street plan.

"It's the most ambitious virtual space we've ever built," said Fredrik Hellberg of London-based Space Popular. "As far as we know it's the first of its kind in architecture."

Attendees selected avatars in the lobby area before navigating along circulation routes to rooms containing architecture exhibitions, watching movies in a cinema space and attending talks held in a large amphitheatre.

They could also network with other attendees by chatting with them in chance encounters or arranging meetings.

The coronavirus pandemic has led to a surge of interest in virtual replacements for physical activities. Virtual fashion is booming as people look for ways to make their online avatars more stylish while architect Arthur Mamou-Mani turned to VR to realise a structure intended for the cancelled Burning Man festival.

Space Popular, which has previously worked on virtual-reality galleries and installations, was invited to design the conference by curator Gonzalo Herrero Delicado.

"This year, because of Covid-19, we couldn't organize the festival in Barcelona, where it was intended to happen," Herrero Delicado told Dezeen.

Herrero Delicado decided against asking speakers to give talks via Zoom like other virtual conferences as "I found them very boring and you cannot really engage either with the speakers or with other people attending".

"I was thinking, how we can do something that is more social, where people can talk to each other, discussing, bitching or gossiping about what is happening?"

Space Popular's solution was to create a grid of rooms separated by circulation routes and featuring facades inspired by Barcelona's architecture.

The grid itself is derived from the Eixample (Expansion), the iconic lattice of city blocks created when Barcelona expanded beyond its medieval walls, with the circulation routes lined with abstracted versions of local building typologies.

Spatially, one of the biggest differences between a virtual and a real conference is that there is no sense of arrival at a VR event, Hellberg said: "You just click on a link and you're there immediately, which means that virtual spaces can't have all of the very necessary psychological kind of threshold spaces that real architecture has."

With many of the attendees unfamiliar with VR environments, Space Popular kept navigation as simple as possible.

The conference environment was built on the Mozilla Hubs platform, which allows attendees to explore online environments without having to download special software, wear a VR headset or remember complex key commands in order to move around.

Attendance was limited to 100 people at a time to prevent users' computers getting overloaded. "We had a capacity that is limited by the processing power of the user and their connection," Space Popular's Lara Lesmes said.

Conference-goers moved through the rooms using simple forward-and-back commands to prevent them from getting lost or stuck, with sound design used as a key tool to help orientation in both a spatial and a social sense.

"Everything hinges on the use of spatial audio," said Lesmes.

As users entered the auditorium, the voice of the speaker would get louder while the din of delegates chatting in the circulation space would fall.

Similarly, when they approached other delegates, their voices would rise in volume so they could engage in conversation without disturbing others.

Besides the conference, the festival featured rooms containing exhibitions of work entered for the 2020 edition of the Arquia/próxima architecture competition, which is open to emerging Spanish and Portuguese practices.

Established in 2007 and organised every two years, Arquia Foundation launches the competition Arquia/próxima to recognise the works developed by Spanish and Portuguese architects during their first ten years of career. 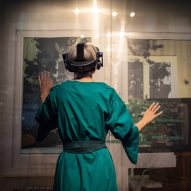 Herrero Delicado said the conference was a success, not least because of the reduced environmental impact.

"Normally the foundation pays for like 100 trips from all over the world for people to come to the festival," he said. "So obviously, the carbon footprint of the festival was minimised as much as possible. And that was to me was a huge achievement."

Lesmes predicted that hybrid conferences that combine real and virtual experiences will become mainstream in future as technology improves. However, she said that virtual conferences will never entirely replace physical events.

"I would never see it as a replacement," she said. "Nothing is replacing going out for a drink."

Punto de Inflexión was held online from 21 to 22 October. The virtual environment can still be accessed at arquia2020.com. This YouTube video gives an explanation of how to explore the festival. For details of more architecture and design events visit Dezeen Events Guide.