Located in Tacuba neighbourhood, the Mar Mediterraneo 34 (MM34) building was originally completed in 1910 and had since fallen into disrepair.

"At the end of the 19th century and the beginning of the 20th century, Tacuba became one of the wealthiest areas of the city with large country houses, which over time and different political changes were abandoned and many were collapsed," said Hernández.

"However, among these vestiges the house of Mar Mediterraneo 34 remained."

His response was to do that quite literally by splitting MM34 into two styles: one has refurbished elements of the old structure and the other half features the original clay-brick walls covered in bright white plaster.

"The project started with the idea of ​​giving a new life to a house designed in two volumes, where the first incorporates the main facade while the second has a view to the main patio, although both were in advanced deterioration and the second volume was in ruins," he explained.

Salvaged and restored existing elements of the historical building include the balconies and lintels, iron railings, large windows and glass roof tiles. Where new materials were used, the architect chose those made by local artisans to pay homage to its eclectic French style.

"The roof dome was rebuilt with a ceramic tile that reinterprets the original glass plates, the same happens with the cornice bordered with Mexican glazed ceramic pieces," Hernández explained.

"The windows of the mansards still preserve some of the original pieces; the missing ones were replaced with Talavera mosaic."

Hernández's restoration work also continued through the interiors of the property, where glass and aluminum window and door frames were added, and floor were reinforced with metal beams and covered in plaster. 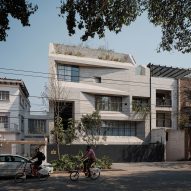 Measuring 620 square metres, MM34 has seven apartments across its three floors. They include lofts, studios family apartments and penthouses.

The homes are flooded with daylight from large windows that also offer views to a rear courtyard. White walls continue inside, where the floors are a mixture of wood and decorative tile.

A number are double-height and have mezzanines floors where the bedrooms are located.

Other apartment buildings in Mexico City include a concrete complex designed by American architecture firm Studio Rick Joy and a building by Arqmov Workshop sheathed in a patchwork of vibrant laminate panels.