Twenty Doshi projects from 1958 to 2014 are shown through drawings and models, artworks, sketches, video and photography at the exhibition, which is on view at the Tadao Ando-designed Wrightwood 659 until 12 December.

Hoof, an architect and director of the Vastushilpa Foundation, curated and designed the exhibition, which is called Balkrishna Doshi: Architecture for the People.

The buildings are arranged into four themes that each demonstrate elements of Doshi's architecture philosophy – Home and Identity, Creating a Livable City, Shaping an Integrated Education and Building Academic Institutions. 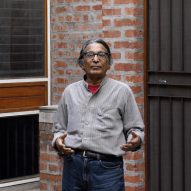 "For him a building is created out of memories, associations, sounds, forms, spaces and images, porous and open-ended in nature," the curator told Dezeen.

"In most of his buildings you don't notice them as being dominate, rather you notice the life that goes on around them," she continued.

"Further, his works underline his interpretation of the essence of life according to the cyclic notion of time in the Hindu philosophy namely: blossoming – accomodative, growing, adaptable & perceptive to change over time; expanding – open endedness, holistic approach and well integrated with the surrounding; melting – merging into the landscape, rooted & inclusive approach to design and churning  – timeless, intangible and groundbreaking."

Read on for Hoof's description of four Doshi works featuring these elements:

The Indian Institute of Management is a leading academic institution spread over 60 hectares in Bangalore, also known as "The City of Gardens". The large campus was built over a period of 20 years and was conceived as a series of courtyards that harmonizes with the city's comfortable tropical climate and lush green areas.

Inspired by the architecture at Fatehpur Sikri near Agra and Madurai Meenakshi Temple in Tamil Nadu, Doshi designed the paths through the campus to connect the elements of the larger spatial arrangement.

Sangath in Gujarati, Doshi's mother tongue, means "moving together through participation". It is Doshi's own design studio, where today three generations work alongside one another. Doshi had just turned 50 and wanted to create something both ambiguous and indescribable. Hence the form and plan of Sangath raise questions of formality and ambiguity.

Very much like Khyal – another genre of Hindustani classical music – the building unfolds meticulously yet retains its fluidity through experience and feeling.  To reach the partially subterranean studio with its characteristic barrel vaults, one must first pass through a series of spaces intermingled with natural elements. The entire ensemble, with a stepped amphitheatre, water bodies, raised plinths, and the silhouette of the vaults covered in a layer of broken ceramic tiles simultaneously merges with and rises up out of the surrounding landscape.

Doshi's memories of places he visited, of running around the meandering streets of his hometown Pune, of sitting on the plinths around water bodies in small villages, of the fabled Nubian vault he encountered at the sculptor Ramses Wissa Wassef's studio in Egypt – all collide and merge into the landscape. The assemblage of these fragments of experiences makes this project very special and give Sangath's its unique character rooted in memories and associations. Doshi often refers to Sangath as his sanctuary.

Amdavad Ni Gufa was not a commissioned project, for the idea was born when renowned painter and sculptor Maqbool Fida Husain approached Doshi when seeking a site for an art gallery. They had been friends for many years, and they often met to discuss their different pursuits.

Doshi wanted the Gufa (Gujarati for "cave") to reflect his 35 years of experience and mark a new phase in his career, but Husain's free-spirited attitude posed something of a challenge. While working on the Gufa's design, they began to question fundamental architectural concepts, including the meanings of function, space, structure, form, and technology.

The plan evolved out of a set of intersecting circles and ellipses that led to the creation of an amorphous space like a womb with no beginning and no end. Non-rectilinear surfaces such as an undulating floor, curvilinear walls, domed ceiling, and slanted columns gave the space its enigmatic character. The light apertures of varied sizes together with the painted ceiling are reminiscent of the Buddhist caves carved into the rock at Ajanta dating to the second century. The structure encapsulates and heightens the play of light, form, echo and sound.

This was a period in Doshi's life when he wrote stories and fabricated myths defining the narrative of his design decisions. These myths and stories became his guides and gave a rational explanation to his imaginary world. Gufa is an example of this marriage of the imaginary with the real manifesting in the form of an underground art gallery.

Aranya Low Cost Housing was aimed primarily at Indore's "Economically Weaker Sections" (EWS) as well as the city's slum and street dwellers. The challenges were promoting a new model of economic growth and empowerment and improving residents' standards of living after a thorough spatial understanding of spaces and activities in the existing informal settlements.

Doshi's design was executed in collaboration with the Indore Development Authority, the World Bank, and India's Housing and Urban Development Corporation Limited. Each unit of the 30-square-metre EWS plots includes a plinth, toilet, and an electrical connection. They were allotted to families by the government using a lottery system. By providing only the essentials, the idea was to empower families to build their own houses and make additions according to their abilities. Sixty sample houses were constructed to demonstrate the different forms the individual homes might take.

Twenty years on, the concept has proved a success. Residents have used their spaces to generate additional income and now belong to the middle-class, accomplishments that bear witness to the economic security land ownership and the virtues of choice, freedom, and social cohesion can provide. Today these houses have become a home and moreover an extension of life of the inhabitants.

By choosing to design for the urban poor, Doshi created a successful example of how society's weaker members can be uplifted – and in doing so he expanded the understanding of the architect's role. Here architecture becomes a catalyst to bring about social change in society by breaking down socioeconomic barriers through a participatory and open-ended approach to design.

Organised by Vitra Design Museum and the Wüstenrot Foundation, with Vastushilpa Foundation, Balkrishna Doshi: Architecture for the People runs from 9 September to 12 December 2020 at Wrightwood 659. See Dezeen Events Guide for an up-to-date list of architecture and design events taking place around the world.