Awarded annually by the Royal Institute of British Architects (RIBA) and personally approved by the Queen, the Royal Gold Medal celebrates those who have shaped the "advancement of architecture".

Doshi was selected in recognition of his 70-year career and his influence on the direction of architecture in India.

"I am pleasantly surprised and deeply humbled to receive the Royal Gold Medal from the Queen of England," said Doshi, who founded his studio Vastu Shilpa Consultants in 1955.

"The news of this award brought back memories of my time working with Le Corbusier in 1953 when he had just received the news of getting the Royal Gold Medal," he continued.

"Today, six decades later I feel truly overwhelmed to be bestowed with the same award as my guru, Le Corbusier – honouring my six decades of practice."

Ninety-four-year-old Doshi, who was the first Indian architect to win the Pritzker Architecture Prize in 2018, has a portfolio of more than 100 built projects that includes collaborations with both Le Corbusier and Louis Kahn.

Among his key projects is the Atira Guest House completed in 1958, the CEPT University, which he both designed and founded in 1966, and the cave-like Amdavad ni Gufa art gallery completed in 1994.

He also created the Aranya Low Cost Housing complex for 80,000 people in Indore, which won the Aga Khan Award for Architecture in 1995.

This year's committee for the Royal Gold Medal included architects David Adjaye, Alison Brooks and Kate Cheyne, alongside curator and historian Gus Casely-Hayford. It was chaired by the current RIBA president Simon Allford.

The committee's citation said that through his teaching and practice, Doshi "has helped define the direction of architecture in India and much of the adjacent regions". 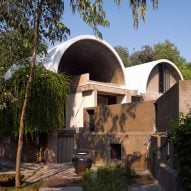 "His many wonderful buildings celebrate the local technologies and crafts as well as the natural habitat to create environments that are legible, hard-working backdrops joyfully accommodating the theatre of everyday life," the citation reads.

"Doshi, now in his nineties, works every day and remains as prolific as he is inspirational. A living testament to the potential of an architectural history of ideas, passed through practice and education from one generation to the next."

Doshi was born in Pune in 1927 to a family of furniture makers. He graduated from the JJ School of Architecture in Bombay, before going on to work as a senior designer for Le Corbusier in Paris and later as his supervisor in Ahmedabad.

He then went on to work with Kahn to build the Indian Institute of Management in Ahmedabad, after which the pair collaborated for more than a decade.

Alongside running his current studio Vastu Shilpa Consultants, Doshi also founded the Vastu Shilpa Foundation to help evolve indigenous design and planning standards in India and has worked as an educator at several universities.

His other key works in India include the Shreyas Comprehensive School Campus, the 700 seat brutalist Tagore Hall & Memorial Theatre and the barrel-vaulted studio called Sangath from which his studio operates.

RIBA president Allford said that Doshi was "a most deserving recipient of this award" because he had "influenced generations of architects through his delightfully purposeful architecture".

The RIBA Royal Gold Medal will be presented to him at a ceremony in 2022.

Last year the Royal Gold Medal was awarded to British-Ghanaian architect David Adjaye, director of Adjaye Associates. He was the first black architect to ever win the prize.

The photo of Doshi is by Pratik Gajjar.