AHEAD announced the best new hotel designs in Europe in a video ceremony broadcast by Dezeen for the hospitality awards programme.

The ceremony was broadcast in two parts on 16 November and can be viewed in order below. The second part of the ceremony, in which the AHEAD Europe Hotel of the Year was revealed, is also included at the top of this story.

The event was hosted by Sleeper Magazine's editor-at-large Guy Dittrich and featured exclusive video content from the AHEAD nominees, as well as from the judges and sponsors of the awards programme. 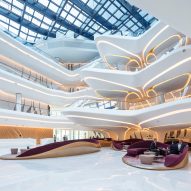 The AHEAD awards celebrate striking hospitality projects from across the world and is split into four different regions: Europe, Middle East and Africa (MEA), Asia and the Americas.

The 2020 Europe leg of the competition reviewed projects that have opened, reopened or launched in the continent between June 2019 and May this year.

Last week, Dezeen broadcast a ceremony announcing the winners of the AHEAD MEA awards 2020.

Dezeen also broadcast a ceremony announcing the winners of the AHEAD Americas awards winners 2020 as part of Virtual Design Festival in June this year.

The second part of the ceremony saw the winners of the Newbuild,  Lodges, Cabins & Tented Camps, Restaurant, Suite, Visual Identity  and New Concept categories, and the AHEAD Europe Hotel of the Year was revealed.