Tehran-based Hooba Design Group has designed a series of concrete volumes to house the showrooms and administrative spaces of the Aptus concrete factory in the suburbs of Karaj, Iran.

The studio was asked to create an indoor-outdoor showroom for the factory, whose previous showroom was located in one of its factory buildings.

"Considering the urge for cost efficiency, it was decided to eliminate finishing layers on the entire interior and exterior of the building and to use the company’s concrete blocks as the single material forming the entirety of the building envelope," Hooba Design Group founder Hooman Balazadeh told Dezeen.

To create a balance between the industrial interior and the surrounding landscape, Hooba Design Group designed the 320-square-metres showroom as a series of one-storey volumes broken up by greenery.

"Instead of creating a huge 'box' surrounded by greenery, it was decided to break the volume into smaller boxes which are independent and characterized based on their function," Balazadeh said.

"The created voids between the boxes form greenspaces penetrating into the building."

Large glass windows and perforated brick walls create transparency between the boxes, which enables visitors to explore the individual spaces whilst still having a visual connection to other parts of the building.

A fish pond with a tiled floor and plenty of greenery add interest and colour to the grey concrete blocks.

"The water feature at the entrance was also part of this strategy," Balazadeh said.

"Different interior spaces have views of this water pool. Integration of functional spaces with the natural landscape and fading the boundaries in an industrial zone could create a nicer environment for the users."

Galvanised iron was used for the roofs of the buildings. Inside, the floors are also made from the company's own concrete, which was cast in place and matches the concrete walls.

Hooba Design Group decided to limit the colour palette of the buildings as much as possible in order to put more emphasis on the company's own product, as well as the connection between the interior and exterior.

The majority of the material was made on-site at the factory itself, eliminating the need to source and transport material.

There is no finishing – the concrete acts as "masonry, isolation and finishing at the same time, optimizing material consumption," Balazadeh explained.

Aptus Factory Showroom is located in a suburb with mainly industrial buildings and some agricultural and residential developments. Hooba Design Group's plan for the showroom leaves open the possibility that the concept could be further expanded in the future, either for Aptus or for other companies. 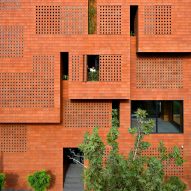 "There are a number of other concrete block manufacturers in the neighbourhood of Aptus factory," Balazdeh said.

"This project could define a simple pattern for this urban fabric which is not only cost-efficient but also enhances the relationship between the built environment and the greenspace."

Hooba Design Group was shortlisted for the Dezeen Awards 2020 in the business building category for its brick-wrapped design of the Kohan Ceram factory's headquarters in Tehran, which was also constructed from materials made in the factory itself.