Studio Wills + Architects has reconfigured an apartment in Serangoon, Singapore so that it accommodates the studio's own office and a snug home for its founder.

The home and office, which Studio Wills + Architects has named Project #13, is shortlisted in the small interior category of this year's Dezeen Awards. It measures 64 square metres and takes over a 30-year-old apartment inside one of Singapore's public housing blocks.

Throughout the day it functions as a workspace, while in the evenings it serves as a home to the studio's founder, William Ng.

"The design really started just as two distinct and autonomous spaces under one roof that can be used independently and/or interchangeably," Ng told Dezeen.

"One part eventually evolved as a home for me, as it minimises time spent commuting between work."

Although there wasn't an abundance of space in the apartment, Ng and his studio first decided to section off part of the floor plan and turn it into a foyer.

"It creates a 'buffer zone' between the public and private domains, and at the same time enables two separate entry points, allowing the spaces within to operate independently," explained the studio.

A door to the left of the foyer leads through the studio's office, at the centre of which are two long work desks for staff.

Set to the side of the room is a tall wooden volume that is integrated with storage and a tea-making station. There’s additionally a couple of shelving units for presenting architectural models.

Towards the rear of the office is a kitchenette and a bathroom – complete with a shower – that is entirely clad with square blue-grey tiles.

During office hours, staff can spill over into the right-hand side of the apartment to work.

It plays host to a relaxing lounge dressed with a plush, cream-coloured chaise longue and a lantern-style lamp that emits a warm glow.

There's another tall wooden volume, inbuilt with stairs that lead up to a mezzanine-level tea room where staff can escape for "quiet and contemplation".

They can also get a bird's-eye-view of the office through an opening that has been inserted in the wall up here.

Beyond the volume, there is an additional table and set of chairs which are used for meetings and another toilet.

These turn into domestic spaces for Ng after staff leave. Dinner can be enjoyed at the meeting table, the break-out area becomes a living room and the tea room serves as sleeping quarters once the seat cushions are replaced with a roll-out bed.

Directly beneath the mezzanine there is also built-in storage for Ng's clothes and dressing room.

Ng told Dezeen that having work and home so closely interlinked has been particularly useful during the coronavirus pandemic when there have been national lockdowns, more commonly referred to as "circuit breakers" in Singapore. 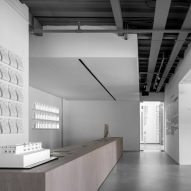 "The dining/meeting room was a space for zoom meetings without interference from adjacent spaces; also, the foyer became a space where food deliveries and material samples could be left with no physical contact."

Studio Wills + Architects' Project #13 is one of five small interiors shortlisted in the 2020 Dezeen Awards. Others include Single Person, a design gallery in Shanghai that's designed to resemble a cave, and Smart Zendo, a family home in Hong Kong that's fitted with voice-activated technology and space-saving furniture.

Photography is by Khoo Guo Jie and Finbarr Fallon.