Seating that resembles bars of soap and pipe-like clothing rails appear inside this Issey Miyake store in Osaka's Minamisemba neighbourhood, which was designed by Shingo Noma.

The store, monikered Issey Miyake Semba, is shortlisted in the large retail interior category of the 2020 Dezeen Awards.

Japanese designer Shingo Noma created the interiors to reference Osaka's long history of maritime trade – the city's port has been in operation since before the year 300 AD.

"Linking the city of water, Osaka, with the continuous circulation of interesting ideas that bubble up from making things at Issey Miyake to the image of the store, I arrived at the design concept of a 'fount of creativity'," explained Noma, who is also art director of the gallery inside Issey Miyake's Kyoto branch.

"If you turn on the faucet, there will always be a gushing flow of interesting ideas."

Water-inspired decor details have therefore been introduced at every point in the store. A four-pronged silver sculpture that looks like the handle of a traditional tap has been mounted on the facade, just above the brand's logo.

Inside, on the store's ground floor, garments are hung from bending metal rails that have been shaped to mimic water pipes.

The same pipe-like tubing supports the display tables, which all feature white, glossy countertops – almost reminiscent of the inner lining of bathtubs or sinks. 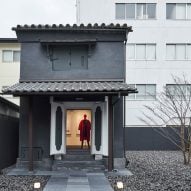 Guests can relax on the white, blue and grey seating poufs that have been dotted across the room. Each one has a wide, rounded form and a raised lip running around its outer edge, emulating the shape of a bar of soap.

The same fixtures can be seen down in the store's basement, which also includes an exhibition space. At the time of opening, it showed a series of works by Japanese illustrator Seitaro Kuroda, including his various depictions of boats and ships.

Surfaces throughout the store, including the floors, have been washed over with concrete. The ceiling and its network of exposed service ducts have been rendered in white.

Issey Miyake Semba will go head-to-head against five other retail spaces in this year's Dezeen Awards. Amongst them is high-end fashion store The Webster, which occupies a rotund, pink-concrete building in Los Angeles designed by architect David Adjaye.

Also on the shortlist is the streetwear brand Supreme's San Francisco store, where studio Brinkworth has installed a huge skateboarding bowl.

Photography is by Masaya Yoshimura and Copist.