Created by Zaha Hadid Design, the Nexxa collection has been manufactured by London-based company Izé, which describes the product as a sculpture rather than a door handle.

"Our initial concept for the lever handle was focused on how we could make it more innovative and at how we could design a handle as if to suggest a single continuous line which isn't broken even if the handle is being turned," said Woody Yao, co-director of Zaha Hadid Design.

"We made it into two pieces coming together with an elbow joint but they had to merge. We did a lot of research in how to make use of the break between the two elements – the socket and lever – as part of the story," he added.

Izé began the process of designing the handle with the late Zaha Hadid, who led the studio until her death in 2016, in 2006. Since then, more advanced architectural design software was developed that aided in the creation process. 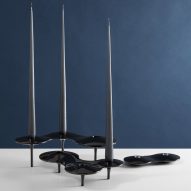 "3D printers allowed us to experiment with form and made it easier and quicker for us to refine the design and to make it more ergonomic, though we were still working with Izé's sculptor and model maker and the back and forth between them was incredibly productive," said Maha Kutay, co-director of Zaha Hadid Design.

The Nexxa door handle comprises two subtly twisted bars of metal with rounded edges that join on an axis.

These undulating forms are typical to the architecture and design firm, bearing resemblance to both its buildings, such as its recent plan for a 36-storey skyscraper in Hong Kong, and its product design, which includes a series of amorphous stainless steel candle holders.

The handle comes in a range of finishes including solid rose gold – a first for a commercially available handle – satin and polished black titanium.

The design studio has also made candle holders with amorphous shapes and an activewear collection for women.