Barcelona-based startup Honext has developed a sustainable construction board material made from a combination of enzymes and cellulose taken from the waste streams of paper production.

The material is made from what Honext describes as an "untapped resource": cellulose residue taken from cardboard and paper waste generated at paper mills.

This paper has already gone through several reuse cycles, meaning that the remaining cellulose fibres are too short to be bound together in order for it to be made into paper again.

As a result, these fibres would typically end up in landfill or be burnt – a process that creates an estimated seven million tons waste globally each year.

Honext, however, saves this material from becoming waste by turning it into construction boards for interior partitioning or cladding.

The company mixes together waste cellulose fibres with water and enzymes – depending on the quality of the waste, a mixture of 50 to 75 per cent paper sludge and 25 to 50 per cent cardboard waste is used.

By adding certain enzymes during the production process, Honext creates stronger bindings between the short cellulose fibres without having to use non-recyclable resins.

This enzymatic treatment is key to the process, as fibres of this length – less than five millimetres – can't usually be held together without resins or other gluing additives for use in the construction industry.

Non-toxic additives are also added to improve the board's UV resistance. This material mixture is then compressed and shaped into a wet board, before the board is fed through a drying tunnel.

After it has dried, any remaining water is evaporated through high airflow and temperature, leaving the final result.

This production method also makes the board emissions-free, says Honext. Unlike similar materials like MDF or drywall, it does not emit any harmful particles.

The cellulose board is also lighter, more flexible and has greater sound absorption than these materials.

"We need to close the loop on the cellulose product life cycle and start seeing this type of waste for what it really is: an untapped resource," said Honext CEO Pere Merino.

In addition to making the material itself as sustainable as possible, Honext also aims to make the production process carbon neutral.

Manufactured in Vacarisses – a village in the province of Barcelona, Spain – Honext's cellulose material is produced using gas and electricity generated from the digestion of the town's waste, while any water used is reused in a closed circuit. 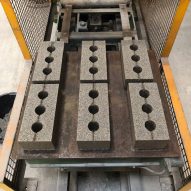 Once the material has reached the end of its life, it is fed back into the production pipeline to create a new set of boards. This process also strips the material of any coating or finish applied by the constructor.

"It makes no sense to manufacture a 100 per cent recyclable material in a way that is not aligned with its sustainability component," said Merino. "Ours is a carbon-neutral process that can be endlessly replicated at no cost to the planet."

The next step in the development of Honext's material is to find leading architects and designers who will use its boards in building projects in order to demonstrate its potential.

Similar endeavours to create sustainable construction materials have seen Scottish startup Kenoteq launch the K-Briq building brick, which is unfired and made of 90 per cent construction waste.

The K-Briq, which took 10 years to develop, generates less than a tenth of the carbon emissions in its manufacture than a regular brick. 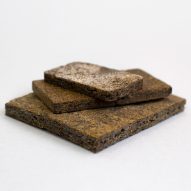 The resulting material, playfully called Chip[s] Board, is biodegradable post-use and, unlike MDF, doesn't contain formaldehyde or other toxic resins and chemicals.