Paritzki & Liani Architects has created a minimal interior for a boutique on the Italian island of Ischia, filled with references to local architecture and volcanic geology.

Located off the coast of Naples, Ischia sits over an ancient volcanic crater, which gives it an abundant landscape of verdant greenery, thermal spas and natural springs.

Tel Aviv-based Paritzki & Liani Architects referenced both the island's landscape and architecture in the redesign of Grifo210, a fashion boutique on its most prominent shopping street, Corso Vittoria Colonna.

The design uses local lava stone, tropical plants and a geology-inspired colour palette. It is also filled with arches, an architectural motif that can be spotted all over the island.

"The groundwork of the imagery in the project for Grifo210 comes from the ramified and rich local Ischia architectural literature and the theme of the Mediterranean essence," said studio cofounder Paola Liani.

"Ischia, despite the frequent aggregations of buildings, maintains a unique landscape unity in the Mediterranean Sea, among the lush green, the tuff mountain and the crystal-clear sea," she explained.

"These concepts were absorbed, lived in and interpreted over time on the island."

Grifo210's interior is divided up into three bays, framed by the arched doorway and ceilings. This creates the feeling of a vaulted chamber in what was previously a very simple space.

To add more curves to the space, semi-transparent curtains are installed around the perimeter. With their folded forms, these curtains give a suggestion of tactility.

"The curtains create cozy exedras in the first two rooms; a recall of those intermediate and welcoming spaces, located between the outer gardens and the covered entrance halls, which can be found in the palaces of Ischia Ponte of the 18th century," said Liani.

The flooring is a monochrome terrazzo, created by hand-placing fragments of locally sourced lava stone, while the display hangers and checkout counter are a bronze-toned metal.

There are only a few splashes of colour. Exotic plants line the windows, referencing the 1950s La Mortella gardens, while pigmented concrete display stands come in shades of cobalt blue, lemon yellow and turquoise. 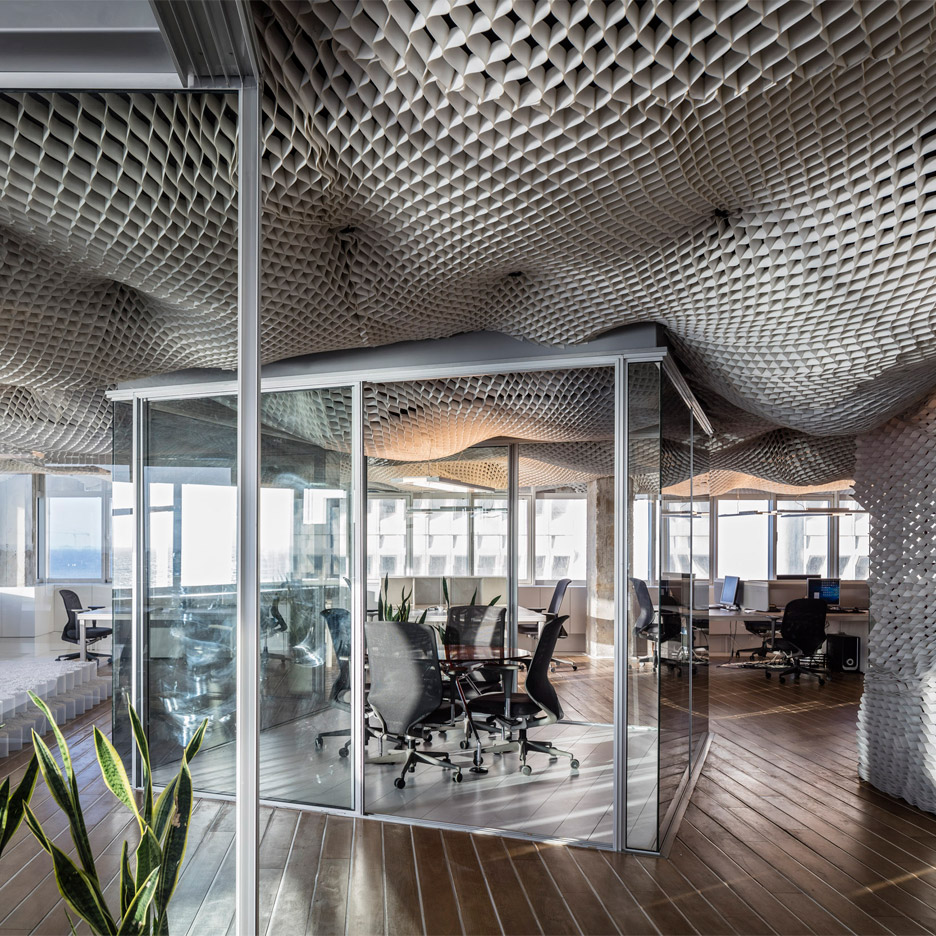 "Here too, we recalled the chromatic palette of this volcanic land, made by warm and matt colours," said Liani.

Paola Liani and partner Itai Paritzki founded their studio in 2001. Other projects they've completed include a house with a bare cliff face visible inside and an office with a billowing "sky-ceiling".