The Israeli studio was asked to design the new office for PRS on the 12th floor of a high-rise block, Sharbat Tower.

Paritzki & Liani previously designed the company's other location in Israel, decorating parts of it using a PRS product called Geocell, which is mainly used to stabilise soil for roads and other infrastructure projects.

It comprises a net-like web of plastic, with openings that change in size as it is stretched and formed.

In the new office, the product is used to create a billowing ceiling intended to reference undulating forms of a cloudy sky and the ocean, both of which are visible through the windows.

According to studio co-founders Itai Paritzki and Paola Liani, the aim was to "express the company's identity and its strong innovative spirit".

"The company produces Geocell – a cellular confinement system, made of plastic – using it mainly for earth stabilisation," Paritzki told Dezeen. "Our aim was to use their product in a new way, trying to destabilise their office space."

The architects suspended the web-like material to the ceiling, fastening it at some points, but allowing it to wrinkle and flow in others. This creates a surface that changes in both height and transparency.

Where the undulating material runs up to the windows, small mirrored panes near the roofline reflect the cloud-like forms so that they appear to continue outside, merging with the clouds visible through the windows.

"We built a sky-ceiling membrane, modelled with the Geocell net, capable of both adapting to the acoustic needs and acting as a technical support for the structure," said the architect.

"In this way, it became a unique, expressive object, consistent and in dialogue with the sea waves," he added. "The varying density of the material, thanks to its flexibility, can assume different degrees of transparency and visibility." 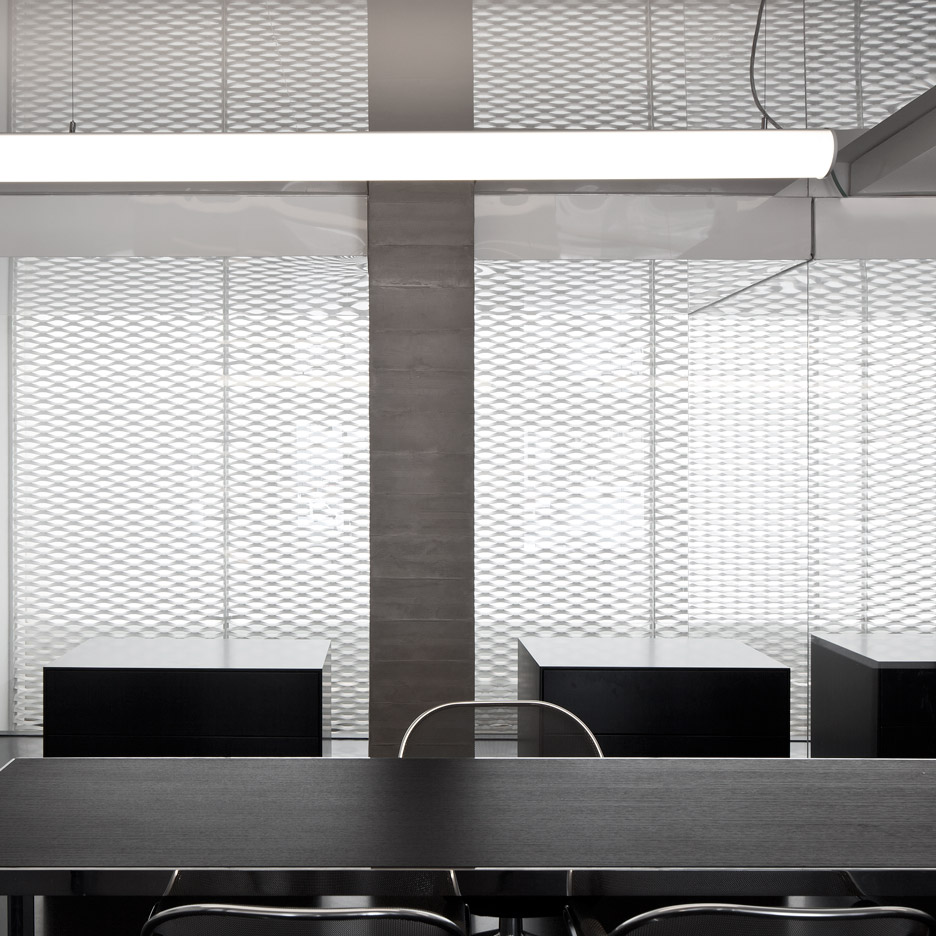 The billowing forms also run down the glass walls on either side of the entrance to the office, offering extra privacy for the business and leading visitors through the double glass doors that form the entrance.

Lights are suspended from the ceiling throughout the office, allowing shadows to play on the bumps and hollows above.

The desks are located along one edge of an L-shaped plan near the large windows, separated from the entrance area by a meeting room and a relaxation area.

The relaxation space is also made from the company's Geocell material, but has been filled with pebbles to create a plinth that can be sat or lain on.

"This is an island, composed of three levels of overlapping Geocell and filled with small, white stones, where it is possible to lie and contemplate the landscape," added Paritzki.

Paritzki & Liani Architects has been established in Tel Aviv since 2001. The studio has also designed a house in Jerusalem with a glazed wall that abuts a bare cliff face and an apartment in Tel Aviv with a panoramic view reflected on the ceiling.