Architecture studios B+H Architects, 3XN and Zhubo Design have revealed the design for a natural history museum that will be built in Shenzhen, China.

The three studios' competition-winning project, which is entitled Delta, was designed to have a curved, flowing shape that resembles the flowing form of a river.

B+H Architects, 3XN and Zhubo Design's natural history museum is set to be built in the Yanzi Lake area of Shenzhen's Pingshan District.

It will be topped with a publically accessible park that will gently rise from ground level to offer a walkway along the roof of the curved building.

"A public park extends throughout the roof and highlights the Natural History Museum's organic geometries. Like a river stream finding its shape in balance with the earth, every turn frames a new spectacular view over the surrounding park, hills, and lake from dedicated viewing terraces along the roof park."

The 42,000-square meter museum will contain a series of galleries dedicated to natural history and the ecology of Shenzhen and its surrounding region. These spaces will be accessed from a large entrance lobby at the centre of the building that the studios describe as cave-like. 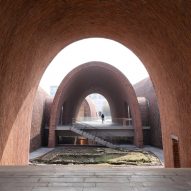 "Like water streaming down a river, the undulating form leads guests to a 'cave' inspired passage that is connected to the museum lobby and activated by multiple cafes and public areas, serving as the pulsating heart of the building," said the studios.

The museum is being built as part of an initiative to create a range of ten new cultural facilities in Shenzhen, with an opera house and exhibition hall as well as technology, oceanic and art museums all planned for the city.

When complete, Shenzhen Natural History Museum will be the first large-scale museum dedicated to natural history in southern China.

The museum is the latest in a wave of new cultural institutions being built in China. Recently completed museums in the country include the Jingdezhen Imperial Kiln Museum, which is housed within cavernous brick vaults, the He Art Museum by Tadao Ando, and a set of ruins that were transformed into a museum by Shenzhen Horizontal Design.