New photos have been released of Pritzker Prize-winning architect Tadao Ando's cylindrical He Art Museum, which has reached completion in Guangdong, China.

The He Art Museum, otherwise known as HEM, is made from a stack of staggered, concrete disks that wrap around a pair of sweeping helical staircases at its centre.

It was designed by Ando as a landmark for the region and is one of the five projects shortlisted for cultural building of the year for Dezeen Awards 2020.

The He Art Museum was commissioned by Midea Group director He Jianfeng, son of billionaire He Xiangjian, as the home for He family's contemporary Chinese art collection.

Ando's design evolved from the family's name, He, which translates means harmony, balance and union.

"I hope HEM will become a new cultural landmark in the Canton region, at the same time, a meeting point and a harmonious space for all," said Ando.

"I imagined HEM as an energetic central anchor point to all the artistic and regional custom, climate, landscape and civilisation in Lingnan."

As the new photos reveal, the stack of concrete discs that make up the museum run from the ground floor to the fourth and are enveloped by a vertically slatted facade.

The heart of the museum is its central courtyard, which houses the staircases. These spiral upwards to connect all four floors and frame an oculus at the top that functions as a skylight.

This oculus helps to maximise natural light within the exhibition spaces and was incorporated by Ando as a reference to ethereal use of light in churches. 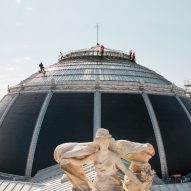 "Throughout western architectural history, architects have been skilful at the use of light such as those seen in churches; this has had a deep impression on Ando and his approach to design," said HEM.

"The central skywell floods each floor of exhibition spaces with natural light, creating spaciousness, clarity and a symbol of hope."

Inside, the concrete structure of the building is exposed throughout the museum, providing a minimal and sculptural backdrop to the artwork.

A pond outside completes the scheme and is designed to reflect its facade while creating a cooling effect in summer months.

HEM was slated to open in March 2020, shortly after Ando revealed visuals of the scheme. However, due to the coronavirus pandemic, the museum opened with a soft launch in October.

The first exhibition at the museum is From the Mundane World: Inaugural Exhibition of He Art Museum that will take place in two phases.

Ando is a Japanese architect who was awarded the Pritzker Architecture Prize in 1995. Among his best-known projects is the Church of the Light, for which he created a full-scale mock-up in 2017 for an exhibition.

His other recent projects include the transformation of an 18th-century stock exchange building in Paris into a contemporary art gallery and the Wrightwood 659 exhibition space in Chicago.

Other projects in China shortlisted for cultural building of the year at the Dezeen Awards 2020 include the Zhang Yan Cultural Museum by Shenzhen Horizontal Design and Jiunvfeng Study on Mount Tai by Gad Line+ Studio.

Photography is courtesy of HEM.