Six Swedish design studios have produced items and materials from industrial waste, including pedestals made from ash and flowerpots from apples, for an exhibition in Malmö, Sweden.

The designers were teamed up with manufacturers as part of the ongoing What Matter_s 2.0 project, which is organised by the Form/Design Center cultural institution.

The results will be shown at the Metabolic Processes for Leftovers exhibition in January, curated by Copenhagen-based Kiosk Studio.

Each of the six studios was asked to create a sustainable material or product using waste from a company's industrial production processes.

Among the studios taking part was Henriksson & Lindgren, which worked with Kiviks Musteri, best known for producing cider and fruit wine.

"The design teams 'speed dated' the manufacturers, and we chose Kiviks Musteri because they stood out from the others since their waste material was all organic and we saw that as an exciting challenge to work with," Henriksson & Lindgren told Dezeen.

The result is a collection of flowerpots and plant clips made from the sludge leftover from the company's juice press. Henriksson & Lindgren worked with two companies in Skåne to develop a bioplastic from the sludge. 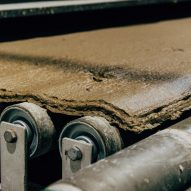 "The polymer group PHA is made from feeding the bacteria in the sludge, and the bacteria produces the biopolymer," said the designers.

"The pots can be made from PHBV, which is the kind of PHA you would get out of the sludge from Kiviks industry, that is extruded into 3D printing filament, and then printed in a regular 3D printer."

The polymer breaks down even in cold temperatures in the ocean without turning into microplastic, according to the designers. It will take about six months to biodegrade in a regular garden compost.

"The idea is that the pots and clips can be used many times, and composted if they break. If a clip by mistake falls off a plant and disappears there is no harm done," the duo said.

Designer Kajsa Willner collaborated with pulp and paper materials company Stora Enso to turn biofuel ash from its production process into a series of pedestals with history-informed shapes.

"When tackling many of today's challenges I believe an important key can be to look back in history for solutions," Willner told Dezeen.

"Starting with the Egyptian pyramids, on to the temples of Greece and later to the Romans who produced Roman concrete from volcanic ash, I found contemporary research on geopolymer, often based on coal ash."

"Geopolymer is an inorganic 3D structure formed between amorphous SiO2 and Al2O3 at medium heat (about 100 degrees) in the presence of strong alkali," she explained.

"These components are found in high concentrations in fly ash from coal combustion, which has been researched the most, but they are also found in smaller quantities in fly ash from biofuels like the one from Stora Enso."

According to the designer, with optimal mixing, geopolymer concrete is stronger, more environmentally resistant and has a lower carbon footprint than concrete made using Portland cement, the most common type of cement.

"I wanted to create massive, cast objects, to really demonstrate the potential with the material and that it can work to replace Portland cement in many applications," Willner said.

Also showing at the exhibition are Carl-Ludvig Svensson, who teamed up with Vida to create a new material from mycelium and sawdust, and Louise Hederström, who made a concrete bench and traffic barrier with waste from Finja Prefab.

M&E turned waste materials from Movomech into a material that can be used for table tops or room dividers, while Lab La Bla and Natural Material Studio worked with Ballingslöv to create veneers and shelves made from wood and ash.

The aim of the project was to demonstrate the power of interdisciplinary collaborations.

"Many big manufacturing companies don’t have any experience of working with a designer and they are unaware of what a designer can bring in terms of understanding users, challenge assumptions, redefining problems and creating innovative solutions," What Matter_s 2.0 project manager Terese Alstin told Dezeen.

"The last few years there’s been several designers emerging from the south with an interest in sustainability and production," she added.

"Given the climate change challenges we’re facing we’re certain this field of design will develop, moving on from a more craft-led production to a commercial setting where it can make a difference."

Photography is by David Stjernholm.

Metabolic Processes for Leftovers will be held in January 2021. See Dezeen Events Guide for an up-to-date list of architecture and design events taking place around the world.