The Hampstead House project involved a complete renovation of the four-storey property, reconfiguring the existing interior to be more space-efficient, and replacing a previous extension at the rear to create a larger lounge and dining room.

Architect Dominic McKenzie and his team sought to restore the Victorian character of the main house in their design. At the same time, they wanted to create a modern extension with its own personality.

"With Hampstead House we wanted to try to create something more imaginative than you sometimes see with London house extensions," McKenzie told Dezeen.

"We wanted to get away from the standard box-like extrusion to create more volumetrically interesting space, with an individual material character that brings a sense of quality."

The architects used a gable form that is common of houses in the area and used it to generate the zigzagging form of the extension's roof. At one end, it creates a dramatic ceiling above the dining area, while the other end steps up to create a new first-floor office.

Externally this extension is clad in handmade bronze tiles, which are folded to create a pattern of tessellating triangles. The idea was to create a shape that matched the shape of the roof, and a colour that toned with the original brickwork.

"Using a metal meant the same material could be used for the walls and roof, allowing the extension to become a more abstracted sculptural object," said McKenzie. 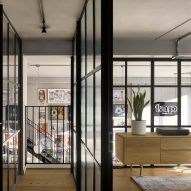 "We also liked the way bronze ages," he continued. "We thought tonally the bronze would stay in keeping with the original building as it aged, whereas copper by contrast would gradually go green."

With fully glazed walls, the new lounge and dining room could easily have felt cold and minimal, but the addition of maple wood panels on the walls and ceiling bring a sense of warmth to the space.

The extension is connected to the front of the house by a glass-roofed "garden passage".

For the rest of the house, the architects worked closely alongside interior designer Suzy Hoodless to create a series of spaces that respect the heritage of the building, but are also suited to family life.

The clients – a family of four – see this house as their forever home, so they want it to be flexible for the future.

One of the most important changes was to reinstate the original staircase at the centre of the house. The previous owners had relocated this to the rear, which made poor use of space.

The relocation of this staircase allowed the basement to be completely reorganised, allowing a bedroom to move to a space with better natural light. Meanwhile, the relocation of the office freed up space for an extra bedroom on the second floor.

Hoodless worked on interiors throughout the house, using a material palette that works with both the Victorian details and the contemporary additions.

In a small library, located off the main living room, walnut shelving and a fireplace made from Welsh slate offer a sense of quality. In the kitchen, she chose a grey marble, while the master bedroom is lined with travertine.

"We think the project is richer for the collaboration between architects and interior designers," said McKenzie. "Suzy understands both modern and historic design and brings a well judged feeling for luxury."

McKenzie founded his London-based studio in 2011. His other projects in the city include a tower-like house house extension in Islington and an office for a music management company.