Australian architecture studio Wood Marsh has designed the Ocean Grove Surf Life Saving Club to emerge from the surrounding sand dunes on the southern coast of Australia, near Melbourne.

Built on the footprint of a previous building, Wood Marsh designed the clubhouse to greatly expand the facilities for the surf life saving club in the town of Ocean Grove.

To hide the increased mass the studio sunk the two-storey into the surrounding sand dunes, which the studio said gave the building its form.

"The design approach is derived directly from its location on the rugged Australian coastline, set within the surrounding dune system," said Roger Wood, director of Wood Marsh.

"The robust materials draw strongly on contextual influences as well as the need to be durable," he told Dezeen. "It is a cohesive programmatic response to provide a place of interaction with the waterfront for the incredible life-saving volunteers and the community of Ocean Grove."

Designed to look like a single storey structure from the sea and surrounding beaches, the clubhouse has a curved timber-clad upper floor above a concrete base.

The lower floor of the building contains the majority of the club's functional spaces including its changing rooms, surf life saving equipment storage, patrol room and ambulance parking that has direct beach access. 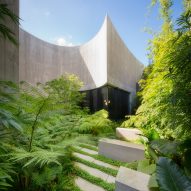 "The purposeful horizontality of the clubhouse positioned behind the dune system means you don't see the basement podium level below and therefore it floats within the coastal vegetation," he continued.

Above the concrete base, the upper floor contains the club's social spaces including the cafe and bar, which both have large windows to give views across the beach and Bass Strait, which separates mainland Australia from Tasmania.

The cafe opens on a large terrace alongside the dunes, while the bar has a small balcony.

Positioned alongside the beach is the surf life saver club's control tower. The small, angular structure was designed to contrast the more curved forms of the main building and look like a piece of rock that had resisted the erosive power of the sea.

"The coast is typically a very weathered dune system with sandstone escarpments that continue to weather," said Wood.

"The sand is constantly being eroded away so that eventually the harder rocks become more prominent. I wanted the control tower to be like a harder prominent rock."

Overall Wood hopes that both the main building and the control tower fit in with the surrounding landscape.

"You can see there's no real corners to this building but curved surfaces the shadows bleed around the corners. The ocean is like that. The sand dunes are like that so it sits softly in the context," he said.

"Using a unified conceptual approach inspired the weathered coastline, there is a strong dialogue between the control tower and the club building," he continued.

"Physically and functionally separate, the continuous fluid forms and robust materiality ties them together as distinctly connected."

Wood Marsh is a Melbourne-based architecture studio that was established by Wood and Randal Marsh in 1983. The studio previously designed Towers Road House, which has high concrete walls that arc under a disc-shaped roof, as "a sculpture to live within".

Photography is by Mengzhu Jiang.