Balenciaga has released its Fall 2021 fashion collection in the form of a video game, which sees players travel through a wonderland-style future world, passing avatars dressed in ripped jeans and metal-armour boots on the way.

The Afterworld: The Age of Tomorrow video game is structured in five different levels, or "zones", which the player simply has to walk through, following a predetermined path of glowing arrows.

The journey starts out in a Balenciaga retail store, before players exit onto a city street and hop onto a bus, which takes flight and warps into thin air.

Participants are then transported to another outdoor environment where they are directed through a series of abandoned concrete structures, and towards a dark forest opening. A white rabbit leads players through the forest to a "secret rave".

Upon leaving the forest, players traverse upward steps through winding caves to the top of a rocky cliff, where an avatar dressed in knight's armour pulls a sword from a stone.

This action seems to explode the rockface to reveal an opening to a red-rock mountain, which the player is directed to walk over until they reach a sunset, where the game closes.

A blank screen with a pulsating circle in the centre appears where credits would usually be shown, with the words "breathe" and "hold" printed across the circle to encourage the player to participate in a meditation-style breathing exercise.

While anyone can now access the video game via Balenciaga's website, a select group of people were initially invited to play the game via Virtual Reality (VR) headsets instead of attending an in-person runway show.

It was within this game that the brand presented its Fall 2021 line, also called Afterworld: The Age of Tomorrow, which is a continuation of its Summer 2021 pre-collection shown in October 2020.

Avatars are dotted throughout each virtual space dressed in garments from Balenciaga's latest collection. This includes oversized, tailored suits made from t-shirt jersey materials that have been made to look worn and creased.

The brand also reimagined 400-year-old steel knight's armour in the form of thigh-high boots and stilettos made from a lacquered material, designed to represent fashion as "a type of armour worn to protect against the elements of judgment". 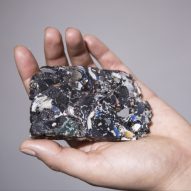 Examples of her work include a pair of sneakers with alternative leather inserts made from the wasted fat, bones and blood of animals.

Balenciaga's creative director, Demna Gvasalia, aimed to create pieces that he thought represented the future of clothing, where "nature and youth co-exist" to offer garments that can be repurposed and last forever.

"People will keep wearing clothes they love until they fall apart. I do myself. So things look quite destroyed, worn-in, pre-crinkled," said Gvasalia.

"The game and the collection imagine a near future in which clothing is meant to transform over many years," added Balenciaga. "Treatments tease out the aging process of materials, emphasizing the idea of wearing something for decades or repurposing it forever."

"In the future, a garment that appears to serve one function may serve another, seeing as certain materials will be reinterpreted for new uses," it continued. "A satin trench is not a coat but a party dress." 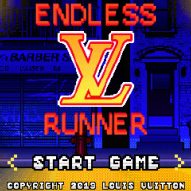 "Jeans layered over pants and sweats showing a boxer short waistband are actually each a single item," the brand added. "As animal fur is no longer appropriate for people to buy new, a puffer is embroidered with recycled fabric that was laser cut to mimic the movement of a fur jacket."

The list goes on, and includes blankets that become coats, parkas with enlarged pockets that function as bags and military coveralls that have been reconstructed to form evening gowns.

Balenciaga is not the first fashion house to create a video game for its designs. Last year Louis Vuitton released a 1980s-style video game called Endless Runner, which was inspired by Virgil Abloh's Autumn Winter 2019 show for the brand.