The American Institute of Architects has banned members from designing spaces for the US justice system used for execution, torture or confinement of imprisoned people, as part of a commitment to "dismantle racial injustice".

The new code of ethics forbids AIA members from designing any places for torture or execution. The ban also includes spaces intended for detaining people for longer than 22 hours a day with no meaningful human contact for more than 15 consecutive days.

Torture and confinement against public welfare

"This decision emphasises AIA's commitment to making a difference on this issue and upholding human rights for our society,” said AIA president Jane Frederick.

"Specifically, AIA members are required to uphold the health, safety and welfare of the public," she added. "Spaces for execution, torture and prolonged solitary confinement contradict those values."

According to the AIA, the code was drawn up to "meaningfully address structural racism in the built environment" in the US. Black people are currently imprisoned at five times the rate of their white counterparts, and Hispanic people are incarcerated at twice the rate of white people, as reported by the Pew Research Center.

"We are committed to promoting the design of a more equitable and just built world that dismantles racial injustice and upholds human rights," Frederick added.

The update comes in the wake of a wider call to address systemic racism in the architecture industry, after the killing of African American George Floyd by a white police officer in Minneapolis this year triggered anti-racist protests across the US.

In the wake of these events, architectural designer Michael Ford called on architects to stop designing prisons and jails in an interview with Dezeen, describing them as representations of systemic racism in the US. 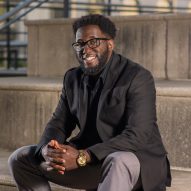 In another interview, the founder of Designing Justice + Design Spaces Deanna van Buren said prisons "were built to hurt people" and architects should lead the way in creating new typologies of justice.

The AIA has also promised to set up a task force with the goal of defining what designing for restorative justice – where the harm caused by crimes is addressed at a community level – would mean for America's architects. This task force will also identify best practices and develop educational resources on the subject.

In the meantime, AIA members were encouraged to "promote criminal justice reform and rehabilitation" to their clients.

The US has the world's highest number of incarcerated people, with over two million people detained in prisons and jails. Despite making up only 12 per cent of the adult population of the USA, 33 per cent of the country's prison population is black according to the Pew Research Center.

80,000 people held in solitary confinement every day in America

According to the Prison Policy Initiative, in some US states Indigenous Americans are seven times more likely to be imprisoned than white people.

The American Civil Liberties Organisation (ACLU) estimates that 80,000 people are being held in solitary confinement every day in America.

Experts now conclude solitary confinement can be as distressing as physical torture. In America, this treatment is facilitated architecturally by supermax units specifically designed to keep prisoners in single-occupancy cells, some without windows, for up to 24 hours a day.

Main image is by Pavlofox from Pixabay.