The facility, called Anstalten, is the first high-security prison in Greenland, which previously relocated all of those sentenced for serious crimes to Denmark.

These relocated inmates will now be given the option to transfer back to Greenland and serve their sentence closer to home.

Designed by Schmidt Hammer Lassen and Friis & Moltke to be a "small village", the Anstalten complex was completed in 2019. It comprises roughly 8,000 square metres of units for 76 inmates alongside workspaces, educational and sports spaces, a library, health centre and chapel.

"This 'humane facility' concept mimics the rhythm and structure of everyday life," said the architects.

Forty of the prison's cells are "closed" and 36 are "open", in accordance with Greenland's prison system that allows inmates to continue to interact with their communities, to visit family and work.

Situated between the base of a mountainous landscape and the Nuuk Kangerlua fjord, the Anstalten prison was designed to "blend seamlessly" with its surroundings and create a connection to nature for inmates.

"Respect and dignity are at the heart of the design, reflected to the point between people and institution, as well as in the relationship between the building and the unique natural setting that surrounds it," said the architects.

This guided the material choices, with blocks clad in weathered Corten steel and raised on concrete podiums that follow the contours and irregular level of the site.

Walkways connect these separate blocks, aiming to provide some mental and physical separation between the living and work areas. 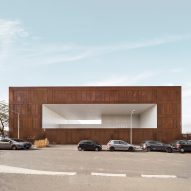 "The contrast between beauty and roughness was a guiding theme in the design for Anstalten," the architects said. "We focussed on openness, light, views, security and flexibility, and incorporated local, native culture into the design process."

Each residential block is divided into a series of private 12-square-metre rooms, with bar-less windows providing views over the prison's concrete wall towards the sea and surrounding landscape.

A panoramic window spanning the length of the common room frames further views, while in the chapel, tall thin windows between timber-fin walls look out at the mountains.

A selection of interior walls, as well as the prison's concrete perimeter wall, have been finished with work by Greenlandic artists Julie Edel Hardenberg, Miki Jakobsen and Aka Høegh, inspired by traditional local costumes and mythology.

The photography is by Adam Mørk.