Hñähñu Multimedia Center by Aldana Sanchez Architects is a house in Mexico's Mezquital Valley that has a top-floor community internet cafe.

The home and community centre is located in the Ex Hacienda Ocotzá neighbourhood of a settlement called Julian Villagran. The nearest city, Ixmiquilpan, is 11 miles away.

Catalonian-style brick arches with glazed ends create a lofty, light-filled space for villagers to gather and drink coffee while using the internet on the computers, access phone services and play games of table football.

Downstairs is a residential apartment with separate access. A bedroom and bathroom for the house occupy part of the first floor, walled off from the community space.

The village only has a population of around 1,000 people, many of whom are Hñähñu – indigenous people of Mexico's central region.

Many residents have relatives who have immigrated to the United States, so accessing the internet and phone is an important way to keep in touch with loved ones.

Aldana Sanchez Architects screened the house with a lattice of bricks held together by nodes of concrete in a triangular pattern to provide shade and privacy from the comings-and-goings of the public cafe.

The building is raised on a plinth of cinder bricks, arranged in a contrasting herringbone pattern.

Concrete steps lead up the side of the house to the top floor internet cafe, which is topped by three brickwork barrel vaults. 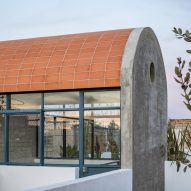 Inside the black steel beams of the building's structure are exposed, with stone tiled floors and walls that are a mixture of herringbone red brick and timber planks.

The railing of the outdoor terrace is a continuation of the latticed brick screen from the house below.

Aldana Sanchez Architects is a Mexican firm with offices in the US, founded by Mike Aldana and Tisha Sanchez.

Photography is by Marcos Betanzos.