The small, 100-square-metre house is located a plot at the edge of the Mexican capital. Escobedo Soliz said the surrounding area is set to experience a wave of developments in the next seven years.

In response, the local studio arranged the brick and concrete house to wrap an outdoor space, so activity can take place privately.

"Because of this characteristic of the immediate context we decided to design an intrusive body of brick with a concrete skeleton that opens to an inner patio to protect the views from the other neighbours to the plot," Escobedo Soliz said. "This patio is the core of the whole project."

The patio is flanked by two wings, described by the studio as "arms", connected by a linear walkway. On the ground floor, one of these volumes contains the living room, while the other is occupied by the kitchen and dining room.

Sliding glass doors are placed along the walls facing the patio so each room can be opened up to the outdoors.

The property, called Casa Nakasone, provides the home for a retired teacher.

Escobedo Soliz chose cheap and local materials and employed local techniques to suit the client’s tight budget. The foundations, platform, stairs and one of the house's walls were all built using volcanic stone found on site.

"The limited budget of the client forced us to use the most common and economic materials of the local construction industry," Escobedo Soliz said.

"We worked hand-by-hand with the local builders to re-interpret their knowledge on local construction systems."

Inside, most of the structural materials are left exposed to keep within budget.

The brickwork and stone walls are punctuated throughout by red-painted, gridded steelwork that frames the windows and glass doors. The floors are covered in a mixture of tiles and concrete that nod to the hues and materials of the exterior. 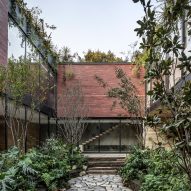 Pale wooden beams cover some of the ceilings. They match a number of wooden interior details, such as the kitchen island, dining table and the book shelf-cum-banister that runs along the stairwell on the first floor.

The staircase is topped by a skylight that is used to bring natural light into the circulation wing.

Two bedrooms are located in each wing on the top floor. The bedroom at the rear is accompanied by a bathroom that is painted a bold blue hue.

Escobedo Soliz had originally planned to create a matching patio house at the back of the plot, for the teacher's sister. However, the second house was cancelled, leaving room for a large garden.

Escobedo Soliz was founded by architects Lazbent Pavel Escobedo and Andrés Soliz in 2011. In 2016 it won the MoMA PS1 Young Architects Program contest, with a proposal to build a temporary web of brightly hued rope across the MoMA PS1 gallery.

Frida Escobedo described Escobedo Soliz as one of Mexico's emerging talents as part of a video-interview series with Dezeen.

Photography is by Ariadna Polo and Sandra Perez Nieto.