Polish visual artist Alicja Biała has painted a set of colourful large-scale murals inside the Concordia Design building in Wrocław, Poland, as part of its renovation and extension by architecture firm MVRDV.

The murals cover 500 square metres of the office building and rise as high as ten metres. The art was informed by the architecture of the building, as well as local folklore.

Biała, who also designed a large light sculpture for the project, lived on-site for five months while painting them and used discarded materials from the site for some of her designs.

She worked around the existing architecture to design the murals that depict characters, some of them mythical, as well as flora and fauna.

"It was quite complex to plan out and design, given that it's not one wall, it's not flat," Biała told Dezeen.

"The main painting consists of connected two walls and ceilings. All had to work well from all perspectives, different angles and be coherent."

Dutch architecture firm MVRDV renovated and extended an existing 19th-century building on the Słodowa Island in Wrocław to create Concordia Design, keeping the facade of the historical building.

It now houses co-working spaces, an event space, a food hall, and a roof terrace as well as a restaurant and cafe.

Biała's large entrance artwork is visible through the glass facade of the extension and covers about 400 square metres, before transitioning for another 100 square metres throughout the corridor that connects the two main spaces of Concordia.

The studio created the opening towards the park, where the mural is displayed, early on in the design process to make the building more inviting.

"On both ends of the building we wanted to open up the building with a large void space in order to be inviting visitors and by-passers into the building," MVRDV partner Fokke Moerel told Dezeen.

"In the extension, we could also make the void transparent, while on the existing side, it hides behind the old, monumental facade." 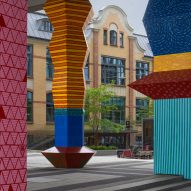 "The mural was an early concept to align with the presence of this type of art in Wroclaw and to create an inclusive message towards the surroundings: joyful, playful and stories of the history," she added.

Biała also created art "interventions" in each of the 75 office spaces and on the reception desks on two floors.

She used 19th-century tiles which she found onsite to clad a large reception desk, after cleaning them and then reglazing them with two human figures and decorative patterns and flowers.

“It’s quite difficult to reglaze something from so long ago without issues," she said. "They warp and crack, the glaze crawls off. But in the end, the pieces and their history speak their own design; we just give them another chance."

The artist also designed a colourful four-by-four metres light sculpture for the project, which weighs half a ton and hangs in the foyer on the historical side of the building.

"It was inspired by pagan folk decoration called traditionally 'spider' or 'chandelier,'" she said.

"It is a colourful ornament made usually out of paper, straw, textiles. Those folk 'installations' were to symbolise happiness, harmony, good harvest."

Biała, who won a competition to create the Concordia Design project, had previously created totem poles that sit underneath MVRDV's Baltyk building in Poznan and visualise climate-change statistics.

She will paint a final large mural on Concordia Design's top floor next year.

“The island has always been a gathering place for the city, a space of many different people," she said. "I wanted to show this multiplicity in a way that is similar to sitting on a bench on the island and watching the many stories pass by."