Residents of London's Leyton neighbourhood have crowdfunded the overhaul of an entire block on their local high street, recruiting designer Camille Walala to decorate it with a large-scale mural in her colourful, signature style.

Called Walala Parade, the piece stretches across the facade of eight different buildings, reportedly making it one of London's largest public artworks.

The final design was voted on by the local community and paid for using £40,000 raised as part of an appeal by east London street art collective Wood Street Walls.

London mayor Sadiq Khan contributed an additional £25,000 towards the project as part of his Crowdfund London programme, which is helping to finance creative, community-led projects across the city in collaboration with civic crowdfunding platform Spacehive.

"We're particularly excited to see Walala Parade come to life at a time when the high street has been hit hard by the pandemic," said Spacehive founder Chris Gourlay.

"Ideas like this don't just lift our spirits – they help places to build back better."

Leyton, which is based in the borough of Waltham Forest in the northeast of London, is home to a large and diverse immigrant population alongside young creatives, who come to the area for the affordable studio and workspaces that have been created in its abandoned warehouses.

Through the use of her vibrant, graphic visual language, Walala aims to give expression to this particular identity.

"Waltham Forest is such an exciting and creative area of east London – now it's going to look the part, too," said the designer. 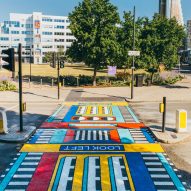 "Art and colour have an amazing power to spread positivity, especially at the scale of the street. It's wonderful to have an opportunity to have such a significant impact on the look and feel of an entire neighbourhood."

Wood Street Walls commissioned and realised the design, sourcing paint from the surrounding area in a bid to support local businesses.

A portion of the paint was also supplied by the Forest Recycling Project, which saves unused pots from going to landfill by selling them to community organisations, charities and artists at a discounted price.

The project's fundraiser was backed by a number of local businesses, including the animation studio Mighty Elk and Deeney's cafe, in the hope of reinvigorating the previously neglected high street.

"We believe art and culture is a great way to engage the community and brighten up public space, instil a sense of civic pride and also attract more people to the area and increase footfall," said Deeney's co-founder Patrick Dwyer.

"As we emerge out of lockdown, this is more important than ever."

Another recent project in the capital has seen Walala give a colourful makeover to two pedestrian crossings and a building facade in the district of White City.

The designer's work forms part of a wider movement termed the New London Fabulous. The term, coined by Adam Nathaniel Furman in an interview with Dezeen, refers to a group of designers including himself and  Walala, who are consciously using colour and pattern to spread joy.

Photography is by Tim Crocker unless otherwise stated.