Architectural photographer Edmund Sumner has shared a set of images of the Indian Institute of Management Ahmedabad by architect Louis Kahn, which was recently saved from demolition.

Sumner took the photos of the Indian Institute of Management Ahmedabad (IIMA), which faced an international outcry over its plans to demolish 14 buildings on the site, over a series of visits between 2008 and 2016.

"I first photographed the Indian Institute of Management in 2008 as part of a story on Ahmedabad's modernist legacy, the weather was brutally hot but the building and its immediate environment were cool and its shaded corridors refreshingly cool with its semi-tropical vegetation offering a further respite from the brutal sun," Sumner told Dezeen.

"Anyone who has travelled to India will know how frantic and hectic the pace of life is, in short, it can be overwhelming. I planned to spend an hour maybe two at IIMA but ended up staying all day and have returned on many occasions since."

The management school in Ahmedabad in the Indian state of Gujarat came under pressure after it revealed that it intended to replace a series of crumbling dormitories designed by American architect Kahn with new buildings.

Following international pressure, including a petition organised by UK magazine the Architectural Review, the school's board of governors announced it had abandoned its plans.

Like many, Sumner was saddened to hear that IIMA was considering demolishing the dormitories, however, he was not surprised as rising land values surrounding the management school's campus is placing pressure on the institute to develop the site.

"I was saddened to hear of the proposed demolition because, for me, it contradicts and threatens the very DNA of the building and its core legacy and hints at greed or trouble ahead," said Sumner. 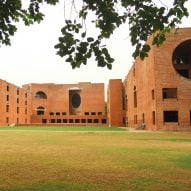 "I'm told by reliable sources that IIMA wasn't immune to the commercial real estate pressure encircling the campus and that a recent nearby building was approved at a certain height so there was a 'commercial opportunity' to maximise 'verticality'," he continued.

Although the board of governors has reversed its decision, Sumner fears that the buildings may still be under threat due to commercial pressure and the poor condition of the brickwork.

"It's a relief to hear that the plans have been shelved but I worry 'commercial considerations' will soon re-emerge," he said.

"Let's hope in years to come IIMA doesn't follow the English model and sell off all its facilities and install Starbucks, Tesco and gyms on the ground floor."

Sumner described the campus, which includes the Vikram Sarabhai Library, main school complex and 18 dormitory buildings as "oasis of calm".

"I found IIMA an oasis of calm not only environmentally, but aesthetically and conceptually," he said. "A simple and honest materials palette housing an organization with a clear and not overtly commercial central purpose. Here was a building that somehow was above and beyond commercial influence and carried a certain dignity because of it," he continued.

"It was refreshing to see a modernist icon being used for the purpose it was designed for. This was a building that neither wanted nor needed attention but was confident enough to get both."

Kahn is one of the most celebrated twentieth-century architects. He is best known for his monolithic complex including the Capitol Complex in Dhaka, Bangladesh and the recently restored Salk Institute in California.