The studio headed by Mårten Claesson, Eero Koivisto and Ola Rune designed House of Many Courtyards for a tree-lined site set amongst sand dunes on the Scandinavian coastline.

The permitted building area for the house was just 170 square metres but the client wanted a house twice that size, so the architects were faced with the challenge of maximising the property's perceived area.

The staggered plan comprising interconnected boxes flanked by courtyards ensures the living spaces enjoy views of the surroundings whilst also maintaining their privacy.

"In the facade, each protruding box is a closed wall while full glazing is used inside the courtyards – sometimes at their deep end, sometimes sideways facing," the architects pointed out. "Besides framing each view, the outlooks become very private."

A 40-metre-long corridor forms a central spine that connects each of the individual boxes and extends the floor space of the various rooms. The varying heights of the rooms help to differentiate them from one another, both internally and externally.

"Each box was given a unique ceiling height in accordance with the function and proportion of the room, like a strand of beads of various sizes," the studio added. "This makes moving through the house an ever-changing spatial experience."

The sense of space is increased by glazed openings that look onto the internal courtyards. Sliding doors connecting the rooms with the outdoor spaces can be opened to effectively double the useable space. 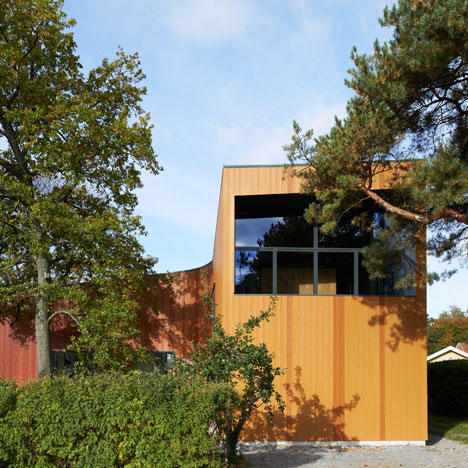 A pared-back material palette is used throughout the building, including pale brick walls, hardwood ceilings and limestone flooring that extends from the living spaces to the external terraces.

The Kolumba bricks from Danish firm Petersen were chosen to match the colour of the sand on the nearby beach, while their proportions and pattern are echoed in the floors and ceilings.

On the southern side of the building is a terrace accommodating outdoor dining and lounge areas. Stone steps lead down to a swimming pool and a separate patio looking out towards the sea.

Claesson Koivisto Rune was founded in Stockholm in 1995. The studio initially focused on architecture but has steadily expanded into a multidisciplinary practice working also in the fields of interior and product design.

The firm's previous residential projects include a house created in collaboration with architect Todd Saunders that features angular terraces overlooking the Norwegian city of Bergen.

For an 18th-century mansion in the south of Sweden, the studio added swimming pools and spa buildings clad in zigzagging parquet, while another Swedish house features colour-shifting wooden walls that curve around an oak tree.