Provocative architecture studio Opposite Office has envisioned fortifying the US Capitol building in Washington DC in reaction to the invasion of the building by Donald Trump supporters last week.

Named Capitol Castle, the concept would see the neoclassical Capitol building, which is the seat of the US government, surrounded by a 1.5-metre-thick fortified wall.

"As a reaction to the storm on the Capitol by supporters of Donald Trump, we designed a plan to convert the Capitol into a fortress to protect democracy," said Opposite Office founder Benedikt Hartl.

"During his reign, Trump undermined the democratic system from within. To give expression to this drama, we remodelled the Capitol and built a fortress around it."

Opposite Office created the fortress following an invasion of the building by pro-Trump supporters aimed at halting the certification of Joe Biden as the country's new president.

"The architectural concept is simple: adding a second layer to the Capitol as a protective shield," Hartl told Dezeen.

"The political and social concept behind it is a bit more profound, even if it doesn't look like it at first glance – the dystopia of Capitol Castle is intended to contribute to the debate about democracy, the ability to protect democracies and, above all, the division of our society."

Although the concept is provocative and is extremely unlikely to be built, Opposite Office designed Capitol Castle to be a serious reflection of the threats to democracy.

"It's tongue-in-cheek, but the question behind it is relevant: how can we protect our democracy?" said Hartl. "Democracy is not for free. Most of us living in the USA, or in Europe, know of no other form of government than democracy."

"Therefore we cannot appreciate it, because we do not know what it is like to live in a dictatorship," he continued. "We take democracy for granted. But it is not and it was fought for over centuries. Democracy is not a gift. Democracy must be fought for, filled with life and renewed."

Capitol Castle would see the original building, which was designed by William Thornton and completed in 1800, encircled by a 1.5-metre wall made with recycled bricks from construction waste. 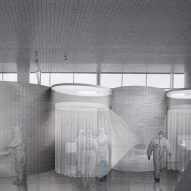 Designed to be "the greatest castle that was ever built", it would have rounded corner towers and projecting triangular bastions along its walls. It is depicted with armed soldiers patrolling the walls and a Trump Baby blimp flying above it.

"I looked at history and took the best parts of all castles," explained Hartl.

"With 36-feet-thick walls, Capitol Castle has thicker walls than Chateau de Ham, which was built in the late 15th century in France. Of course, it is also more beautiful than Neuschwanstein Castle in Germany."

"Because I believe in regional architecture. You can also find some architectural and stylistic elements of Smithsonian Castle, which is less than one mile away from Capitol Hill."

Although the proposal surrounds the seat of the US government with a wall, Hartl does not believe that fortification of democratic buildings will protect democracy.

"I don't think you can protect democracy with walls or architecture," he said. "The only protection of democracy lies in social justice, fair living conditions, fair wages and a real social perspective for everybody!"

"For me, architecture these days is no longer building houses, but building architectural stories," he continued. "In a western world of abundance and exuberance, it is no longer so important to build the most beautiful house, but rather give an input in social and political debates." 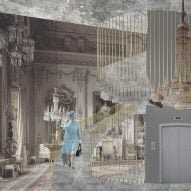 Opposite Office redesigns Buckingham Palace as co-living space for 50,000 Londoners

Munich-based architecture firm Opposite Office has previously proposed turning Berlin's Brandenburg airport into a super hospital to treat Covid-19 and redesigning Buckingham Palace into a co-living space as a solution to London's housing crisis.