Mexican practice PPAA has designed Casa Octavia, a boutique hotel in Mexico City that is based around the eponymous fashion brand.

A facade of slim wooden lattices covers the hotel's concrete and glass exterior, shading the interiors from harsh sunlight and creating a delicate pattern of shadows.

The hotel and its minimalist interiors are designed to be an extension of the clothes offered by Octavia.

"After a long conversation about what Octavia is, we came to the conclusion that a clothing brand nowadays is not only about the product they sell, but more about a lifestyle and a way to live," studio founder Pablo Pérez Palacios told Dezeen.

"So, we transported the clothing brand's values into a 3D space", he said.

The hotel is in La Condesa, renowned as one of the most pedestrian-friendly parts of Mexico City.

PPAA took the nature of the hotel's location into careful consideration. The wooden screen is designed to mediate this relationship, offering passersby a glimpse into its interior space while maintaining a sense of privacy for guests.

La Condesa is also known for its neighbourly atmosphere, and Casa Octavia seeks to honour this tradition by promoting interactions between the neighbourhood and the hotel.

"The scale of the project is very similar to the surrounding buildings," explained Palacios. "We believe it merges very well into the urban fabric".

The hotel's ground floor is a flexible open space that can be used for various community schemes.

"When open, the ground floor becomes an extension of the sidewalk, giving a pedestrian feeling," said Palacios.

"It could also become a more private space for events when closed. It's a mixed typology, and that is exactly what gives La Condesa its vibrant atmosphere."

A courtyard on one side runs across the full length of the hotel, linking to Casa Octavia's entrance.

Guest rooms are arranged in two blocks on the hotel's upper levels. One block is at the back of the hotel, with balconies that overlook the courtyard. The other set of rooms face the bustling street.

Octavia's minimalist style is reflected in the hotel rooms, which each have a king-size bed made up with cotton satin bedding from Casa Octavia's homeware collection. 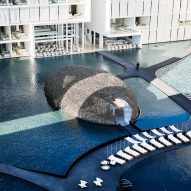 Soft, neutral tones feature in the furniture, sourced from Mexican brands such as Ente, Onora and Encrudo.

"It's all about light and proportions and materials, giving a feeling of being a home away from home," said Palacios.

PPAA, or Pérez Palacios Arquitectos Asociados, was founded by Pablo Pérez Palacios in 2016. Elsewhere in Mexico City, the studio designed houses with latticework screens in the Lomas Quebradas neighbourhood.

In the Tacuba area of the city, architect Inca Hernández has renovated a historic building to create new apartments.

Photography is by Luis Garvan, Luis Young and Maureen Evans.