Tarry + Perry is the first photography studio to have captured the dwelling since its completion in 2018.

Concrete House is designed to nestle within its tree-lined site, evoking a monolithic mass that has been pushed up from the earth.

To achieve this, it was crafted almost entirely from concrete, with a distinctive stepped form that references the South Downs ridgeline over which the house looks.

While providing the impenetrable look for the house, the predominant of concrete was also chosen to give the home a monastic and calming character.

This was informed by the client's interest in and interpretation of architecture by Louis Kahn and his expressive use of concrete.

According to the client, the home is the first building to have been constructed entirely from Resilia – a type of fibre reinforced concrete that negates the need for steel reinforcements.

This material helps to minimise the carbon footprint of the home, while also reducing construction time and costs.

This is because the home's unconventional use of the material has divided opinions online and amongst locals since it was televised unfinished in an episode of Grand Designs, with concerns that the concrete was cold and clinical.

Tarry + Perry hopes that the footage will expose the "the soft side of the concrete monolith" and demonstrate how the material has successfully contributed to the desired minimalist, calming interiors for the home.

It also shows how warmth has been added through the use of bright artwork, wooden furnishings and a number of plants, taking cues from the conservatory of the Barbican Centre in London.

This includes in the kitchen area, which marries mid-century modern furniture and British plum-wood joinery, which pays homage to the site's history as a plum orchard in the early 1900s. 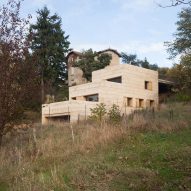 "The house is just so unexpected in every sense," concluded James Tarry of Tarry + Perry.

"Walking toward the house from the drive with no windows visible, you think you're about to enter a deep dark cave, but again I was surprised how much light and heat there was inside," he said.

"For this particular film, we opted for an approach that highlighted the concrete and industrial styling but also pushed it into the background to let the interior design and family life take centre stage," added his studio partner, N​eil Perry.

The architect behind Concrete House, Raw Architecture Workshop, was a London studio founded by Graeme Laughlan and David Mulligan in 2011, which closed its doors in 2019. Other projects by the office include a kinked house in the Scottish Highlands that is partly buried into its sloping site.

Other recently completed concrete houses featured on Dezeen include an ochre-coloured dwelling by Tectoniques that is embedded into the French hillside and the minimalist Pyramid House in Switzerland by DF_DC.

Photography is by Tarry + Perry.