PriestmanGoode has unveiled a concept for a driverless, electric ride-hailing vehicle for London, which the design firm hopes could join the red double-decker bus in the ranks of the city's iconic transport designs.

Confidently dubbed a New Car for London, its angular profile was informed by the capital's brutalist buildings.

Interior finishes are reminiscent of the Tube's distinctive upholstery and an umbrella stand with an integrated dryer accounts for the English weather.

"Cities risk losing their unique identity as a result of the globalisation of the major ride-share apps. We wanted to address this," said PriestmanGoode's creative director Dan Window. 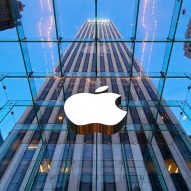 "While our new concept could be adapted to any global city, the vehicle you see here has been designed with London in mind."

"The idea is for the New Car for London to live alongside the city's existing transport icons, like the Tube, the double-decker bus or the black cab, and create a new offer that adds to London's great transport landscape."

At first glance, the 3.6-metre-long four-seater includes many of the same features as other autonomous ride-hailing vehicles that were proposed in recent years.

Like Cruise's Origin car or Renault's Ez-Go, it has no cockpit or steering wheel. Only one set of sliding doors open up into a single seating area, while a digital information strip on the side helps to match the driver with their vehicle.

But the New Car for London also borrows many of its design details from London's architectural landmarks.

Eschewing the typically aerodynamic silhouette of modern cars, PriestmanGoode opted for a boxy shape, which nods to the simple geometry of Denys Lasdun's National Theatre, with its concrete spiral staircase and cubist facade.

The theatre's floor-to-ceiling windows are mirrored in the car's wrap-around glazing, which together with the panoramic roof and glass doors offers unbridled views of the cityscape beyond.

All extraneous details were stripped away to create a timeless, instantly recognisable shape like that of Thomas Heatherwick's Routemaster bus – originally referred to as A New Bus for London. 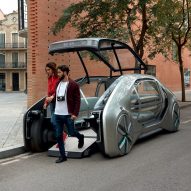 "For us, it is the simple silhouette that makes these vehicles iconic, the kind of thing you can sketch and recognise in 30 seconds," Window told Dezeen.

On the interior, the vehicle reimagines a British heritage aesthetic, with upholstery that takes its shade of royal blue from Savile Row suits and handrails in the same shade as London's hallmark red-brick buildings.

A central rug features a geometric pattern rendered in woven vinyl and adds an element of homeliness.

"Transport for London is so distinctive for its use of moquettes on seats, both on buses and on the Tube, with different patterns on different lines," said Window. "The carpet we've designed for the floor is a nod to that, but was created using hardwearing and easy to clean materials."

PriestmanGoode conceptualised the interior of the car to be easily reconfigured using an app, much like a smart home.

At the push of a button, the two main seats that face each other on the opposite side of the doors can be extended to create a kind of sofa, while two additional seats can be unfolded to accommodate additional passengers.

"In the future, we believe passengers will be able to pre-select from a series of settings – from work mode to leisure or even sightseeing – prior to entry, as well as to customise the lighting and music once in the vehicle, all from their own devices," said Window.

To create a work-friendly environment, the car has a wireless phone charging dock and a rotating table, that can be pulled out to hold a laptop or book.

Taking into account travellers' increased concern for hygiene in light of the coronavirus pandemic, the New Car for London is equipped with a motion-activated sanitiser dispenser and antiviral UV lights that can clean the car in between journeys.

Another feature that was added in response to Covid-19 is a first aid kit, which could be stored in a rear, exterior compartment and be accessed by medical professionals in an emergency situation.

"In March 2020 in London, waiting times for category two emergencies like stokes and chest pain went up drastically to just over an hour because of the pandemic," said Window.

"Our idea would facilitate access to immediate assistance while waiting for ambulance services to arrive. The aim was to consider whether there are ways to support communities, rather than just facilitating journeys for individuals."

Previously, the firm has designed a modular car for autonomous network transit (ANT) company Dromos, which can be used to transport both passengers and cargo and is currently in development.

All images and videos are courtesy of PriestmanGoode.